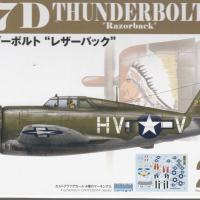 The Republic P-47 was one of two very successful fighters flown by USAAF pilots and were built at Farmingdale, Long Island in New York State. Until the P-51 came along, there wasn’t a more successful American escort aircraft and tactical bomber than the P-47.

I’ve been a fan of the P-47 ever since I found a copy of Robert S. Johnson’s “Thunderbolt!” in my high school library. This kit contains markings for 4 aircraft, and I decided to do Walker “Bud” Mahurin’s razorback. Bud was the first American pilot to become a double ace in Europe (10 victories) and wound up with 19.75 victories. He was shot down over France in May of 1944, rescued by the Resistance, and returned to Britain. Because of his knowledge of the French Resistance, he was transferred to the Philippines, where he shot down a Japanese bomber. Later he flew fighters in Korea, where he got 3.5 MiG-15s, making him the only fighter ace with victories in Europe, the Pacific, and Korea.

This is a Platz/Bego kit. The molding is delicate and outstanding. You get 2 kits in the box, nice extra parts, and decals for 4 razorbacks, all USAAF. The extra parts are 3 props for 3 different types of P-47. There is a nice fuel tank for beneath the fuselage, and bombs and rocket launchers with the necessary attachments.

This project took minimal time, start to finish. I started by painting the interior green in the fuselage halves, the landing gear wells and doors, and the tail wheel interior. The fuselage halves went together with no problems, the wings go together with good fit, and they fit the fuselage neatly. I used no putty on this model. There were a couple of spots on the fuselage which required a little work with a sanding stick, but this was work of just a few minutes. I put the engine in place but didn’t glue the cowling in place because I wanted to paint the white stripe on it separately. The cowling slipped onto the engine and stayed in place with no glue, so I could paint the OD and neutral gray.

I didn’t put the horizontal stabilizers on because I needed to paint them separately.

This whole step in the instructions took about 2 hours. The plastic works well with Tamiya Extra Thin Cement.

I was ready to apply the paint.

I painted the top of the aircraft OD overall. After the paint had set overnight, I made small masks for the wavy line between the upper and lower colors. Here Platz made my life easier, because those drawings of the fuselage on the instruction sheet are 1/144 scale. I just laid Tamiya tape, which is almost transparent, over the drawings and drew the demarcation line with a pencil. I then pulled the tape off, which didn’t damage the instructions, and cut the tape to make the mask. I then added more mask to the upper part to prevent overspray accidents and put the neutral gray on.

The next part was those stripes on the nose and tail. I removed the cowling and put a mask on for the front. I also made masks for the stripes on the vertical tail and horizontal stabilizers. There are decals for these stripes, but I’ve had problems with these not going on nicely, so I preferred to paint them. Once the painting was finished, I installed the horizontal stabilizers.

I applied a coat of Future, and continued.

These decals are really the best. But then they’re Cartograf, IMHO the best in the business.

All of the markings on the left side of the fuselage, from the lettering in front of the victory crosses to the M just in front of the tail are one decal. And it worked. The “Stars and Bars” were almost trouble free.

One place where I did run into a small problem was the serial number. It’s on the same decal as the stripes for the tail. I cut a little bit off each end of the stripe, and it went on over the painted stripe. I am proud that the decal and the stripes are the same width.

I had to do a little paint fixing with interior green, because I didn’t mask the wheel wells or the area behind the cockpit. Once that was done, I installed the engine and cowling, the landing gear, and the tail wheel.

I then sprayed the model with clear flat to take care of the Future Shine’s gloss. The canopy was next, then the prop, and last was the antenna. I always manage to break off the antenna unless I leave it until last. If you look at the instructions, you’ll see the antenna is supposed to go on a bubbletop P-47. But it is in the same place.

And the whole project was finished.

Highly Recommended. This kit goes together as well as anything I’ve built in several years. The parts are finely molded, and except for where the parts attach to the sprues, there’s not a lot of work involved in getting everything together.

The decals are first rate, and the schemes are interesting. The whole project was done in 5 days, and I didn’t push it. I waited for the paint to dry, the glue to set up, the decals to settle down, but everything just came together.

And you get two kits in the box!

Many thanks to Platz for this lovely kit, and thanks to IPMS USA for providing the chance to increase my knowledge on Bud Mahurin.