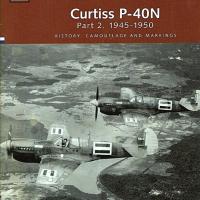 Most aviation enthusiasts assume that the Curtiss P-40N, like General Douglas MacArthur’s “Old Soldier”, just faded away after the end of World War II. This was most certainly not the case as far as the Royal Netherlands East Indies Army Air Force was concerned. As the Japanese began leaving their former Dutch conquests in 1945, they left behind a motley collection of combat aircraft, some of which were appropriated and flown by the Indonesian insurgents, who were determined to get the Dutch out of their islands so they could become an independent country, in accordance with the postwar trend of ending European colonialism in that part of the world. The Dutch, predictably, fought to maintain what had been their colony for over 100 years, and the resulting conflict, which ended about 1950 when the Dutch finally evacuated all but the western half of New Guinea, (That withdrawal occurred about 1962) involved a small amount of air action, mainly using the P-40N’s in the ground attack role.

The Dutch had been using Curtiss P-40N’s primarily for close support duties against the bypassed Japanese forces in the islands, and postwar, although the subsequent acquisition of Ex-RAF Spitfire Mk. IX’s, ex-Royal Navy Fairey Firefly Mk. 1’s, and USAAF P-51D’s did not result in the end of service for the Curtiss fighters. The P-40N’s were virtually worn out in use, and the RNEIAAF even acquired more of them from USAAF surplus stocks during the campaign.

This book outlines the service career of the P-40N after the end of World War II. It basically outlines the combat record of the type, and includes numerous photos, mainly from the personal collections of those who fought this little publicized war. Numerous photos show the marking changes, from the tri-color flags used from early 1942 up to the standard roundel with the orange center used later on. A total of 14 color profiles shows this development process, which actually involved the use of USAAF olive drab over neutral grey, with paint removed for Dutch markings which eventually resulted in planes that were mainly all silver with only small amounts of OD remaining. Each airplane was slightly different. It contains some fascinating information on this little known war, and make for some very interesting reading. The text begins in Dutch, followed by a direct translation in English, marred by only the few linguistic glitches to be expected in this type of publication. At the end is the combat record of each individual aircraft, but this is only in Dutch with no translation, although the meaning is not difficult to determine, as a few words, such as “crash” and ‘losses” allow for easy interpretation.

But that is not all! In addition to a very informative text, the book also includes a set of decals for a total of sixteen different P-40N’s, although wing flags and roundels are only provided for one aircraft. However, these are provided in 1/72, 1/48, and 1/32 scale, and any of the currently available kits of the P-40N can now be built using these markings. Having used their previous sheet on Dutch Brewster Buffalo fighters, I can testify to the high quality of these decals. If you limit yourself to only one scale (as I do) this allows you to use the extras for other models of Dutch aircraft.

This is an excellent publication, and will be most useful to anyone wanting to model these unique postwar P-40N’s. Pick up one of these as soon as you can, as with the decal sheets, they will probably go pretty fast. Highly recommended.

Thanks to Dutch Profile Publications and John Noack of IPMS for the review copy.