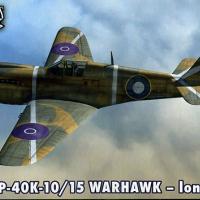 The Curtiss P-40 was one of the most famous fighters of World War II, and went through a long series of modifications during its service life. Although not up to the standard of later fighters, it was available in substantial numbers, and could generally hold its own when flown by competent pilots. While later replaced by P-38’s, P-47’s, and P-51’s, P-40’s continued in service in many air forces after the war, and some were flown by civilians, often for racing. Quite a few are still flying today, and it is not unusual to see one at a fly-in or air show.

Although some models were powered by the Rolls Royce Merlin engine, most were fitted with the Allison engine, which featured the large scoop on the upper cowling. One problem faced by P-40 pilots, and indeed pilots of any high performance tailwheel fighter, was excessive “P-factor” on takeoff, causing the tail to swing to the left on application of takeoff power. Although proper technique involved slow power application and careful attention to the rudder pressures, the Army’s quick fix for this problem was lengthening the rear fuselage to place the rudder further aft for better control. Early P-40K’s had the short tail, the same as the P-40E and F, whereas later production models, P-40K-10 and P-40K-15, received the long tail. This was continued through later production models. The P-40L, a stripped version, reverted to the Merlin, but relatively few were built, and some L’s were refitted with Allisons when overhaul became due. The major production model was the P-40N.

The kit consists of approximately 60 parts on three sprues, plus a clear unit. Parts are numbered on the instruction sheet but not on the sprues. There is one extra P-40K “short tail” fuselage half included for whatever reason. The instructions are entirely pictorial and very clear, and there is a color guide as well as color instructions on the three view drawings. There is plenty of information provided in this kit, and the box art is very helpful.

The parts are, for the most part, well molded, with only a little flash to remove. The exhaust stacks have an interesting method of attachment that I haven’t seen before, with an L-bracket glued inside the cowling and the stacks inserted from outside after painting. This is a good feature. The interior color guide is good for the most part, although I would think that even though these aircraft were in British service, they were probably primed at the factory in US Interior Green or zinc chromate rather than the light grey as stated. The cockpit is very detailed, but there are no real attachment points for the instrument panel. There are lots of butt-fits with little security. Panel lines are recessed and look very good. Wheel well detail is quite good, with built-up walls and some spar detail.

Assembly is pretty standard, and most of the parts fit very nicely, although a little filler is required. The tailplane butt-fits to the rear fuselage, but they line up correctly. The canopy is clear, and some interior detail can be seen. The rear windows don’t quite fit into their recesses and need to be trimmed slightly to make them fit. There is a drop tank provided, but the attachment points are very weak, so I decided to leave it off. I would suggest painting the model before the landing gear and prop are attached, and the several paint schemes presented are fairly complicated. Once the model is painted and decals are in position, the landing gear doors can be put in place. The decals are very well done, and can be applied without trimming. There are no white stripe decals provided for the theater markings, but these look better when painted and masked anyway, so this isn’t a problem. The decals don’t even need any setting solution. They also include many very tiny maintenance markings.

I did the version on the box art, the Royal New Zealand Air Force plane flown from Guadalcanal during 1943. I understand that they used dark earth and a color called foliage green, which is much brighter than regular RAF dark earth. This was an RAAF color, and I found that the Model master Japanese Navy Green was almost a perfect match. It took a bit of masking, but the effect was worth it.

This is a nice little kit of a fairly rare variant of a very famous plane. If you have any P-40’s in your 1/72 scale model display, this is one that should not be left out. Highly recommended for experienced modelers.

Thanks to Squadron for the sample kit and IPMS/USA for the review opportunity.