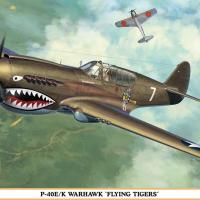 Since as long as I can remember, I’ve been fascinated by the stories of the WWII fighter aces. One of the earliest images I can recall is the famous picture of Robert L. Scott sitting in his P-40 cockpit giving the A-OK sign in front of his kill marks painted under the windscreen. That picture personified the daring fighter pilots of WWII for me. The Flying Tigers were a daring group of American pilots who gave up commissions in the US military to fight as mercenaries for the Chinese government. The Chinese people gave them the name Flying Tigers since the tiger is a symbol of strength in Chinese culture. Led by crusty General Clare Chennault, the American Volunteer Group (AVG) amassed 286 victories between December 18, 1941 and July 4, 1942. On July 4, 1942 the AVG officially became the 23rd fighter group and part of the USAAF. Second to command the 23rd was the legendary Col Robert L. Scott, Jr. Col. Scott would become famous for his memoir God Is My Co-Pilot, a must-read for any WWII fighter ace fan. During his service in China, Col. Scott amassed 10 official victories, although he claims more in his book. He passed away on February 27, 2006, at age 97. The legacy of the AVG and the 23rd is really captured in the famous Shark Mouths worn by the P-40s of the group. In fact, the P-40 looks as if it was designed for just such a marking. No doubt, modelers everywhere have done one or more of these aircraft over the years.

Flash forward to the year 1982 – a young Airman fresh out of basic reported to his first duty assignment at England AFB, Alexandria, LA. As he entered the base quarters office, his eyes were drawn to a large insignia on the wall behind the counter. A winged tiger with lighting bolt in claw. This was the home of the 23rd Tactical Fighter Wing, the Flying Tigers! I was that young airman and it was my honor to be a Flying Tiger and a member of one of the most famous fighter groups in USAF history. The A-10 Warthogs of the 23rd continued the success of their predecessors by amassing a stellar record in the 1991 Gulf War, all this while wearing the shark mouths made famous back in WWII. So, now you see why, when this item popped up on the list in Col. Scott’s markings, I just had to build it.

This kit has been around for a while so I won’t bore you with too much detail. In typical Hasegawa quality, the parts are molded with nice, clean recessed panel lines. The glazing is not done in the typical way. The windscreen and the rear windows are integral with the surrounding panels. If done right, this avoids gaps where these parts would join the airframe on a typical P-40 model. The tail is a separate assembly to accommodate the E or K versions you can build in this kit. Decals are included for Col. Robert L. Scott’s P-40E or Maj. Grant Mahony’s P-40K. Both include the glorious shark mouth markings.

As usual, we start in the cockpit. Everything is there to create a convincing replica. If you don’t use the pilot figure, you will need some seatbelts, since they are not included. I really liked the radiators that are a four-piece affair, including all the baffles found in the real thing. Next up are some cowling inserts for the exhaust pipes and filler panels in front of those. On the latter, parts M-4 and M-3, the panel lines didn’t match so I filled and rescribbed them. There are some panels molded in that have to be filled for the E version. The instructions are very clear which ones need that. The wings go together quickly and feature fully boxed gear wells with a nice spar piece that helps line everything up. Next up is the tail assembly. I’ve never been a big fan of separate tail sections because the fuselage profiles don’t usually line up. That was the case here. I even glued them to the separate fuselage halves beforehand. It didn’t work. I had to sand the joint to an even plane and rescribe.

For colors, I used what was recommended in the instructions. The green and grey have federal standard numbers and were made in the Testors ModelMaster line. I shaded the panel lines dark and put a white undercoat on the control surfaces. The finishing colors were airbrushed. The green looks a little too green to my eye. Most of the artwork I’ve seen has an olive green tint. I decided not to change it. After a few coats of Testors Gloss Coat, it was decal time.

For the most part, the decals work well. I was concerned about the shark mouths conforming to the nose shape but I shouldn’t have been, as they went on fine. All I needed was a little Micro Sol to make them settle in.

It was time to fit this bird out. The landing gear is really impressive. Even the gears to wind the legs into the bays are there. I fitted the drop tank, since that’s the most common load in photos of the real thing. There is a nice 500lb bomb if that strikes your fancy more. The glazing looks awesome when the masks are removed. I’m a big fan of pilot figures, even though painting them is not my strongest skill set. The edges on this one were bold enough that a good paint job is possible even with old eyes like mine. The prop is a no-brainer as it falls together and attaches with a nylon washer that this manufacture seems so fond of. The exhaust pipes are separate assemblies and a bit fussy to install. They do display nice open ends, so they are worth the effort. I broke the OOB rule in two areas. First, there are no gear position indicators on the wing tops, so I added some. Second, the ring and bead gun sight include a solid-piece crosshair ring. I replaced it with a PE part from the spares box. You have the option of painting the molded navigation lights or cutting them off and attaching the included clear parts. I chose the later. A couple stretched sprue antennas round things out, and Col. Scott is ready for takeoff!

This is a great kit of an iconic aircraft serving in legendary unit. It’s within reach of the average modeler. The striking markings are attention-grabbing. My daughter asked me what they meant and I was only too happy to give her a history lesson.

Thanks so much to Hobbico and IPMS/USA for the review opportunity and Hasegawa for boxing this kit with some famous Flying Tiger markings.