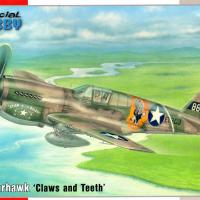 The Curtiss P-40 E was one of the few US aircraft available in any numbers at the start of World War II. In addition to US usage, a large number were supplied to the British under Lend-Lease provisions. These were called the Kittyhawk 1A. These were used in various Commonwealth nations and a number were even reacquired by the US. While adequate in performance for it’s time, the performance of the P-40 E was somewhat inferior to the Zero, Messerschmidt and Spitfire.

Early versions of the P-40 were made famous by the AVG (Flying Tigers) and the image of the tiger mouth on the front fuselage intake became well known.

This excellent new kit from Special Hobby covers the P-40 E with markings of two P-40s flying for the 49th Fighter Group located in Darwin, Australia and two with the 23rd Fighter Group (ex-AVG) located in China. Three of the markings feature beautiful tiger mouth markings while the fourth features a diving eagle with talons extended.

The kit is very accurate and has excellent detail. The cockpit features an accurate two piece seat with decal seat belts, detailed separate cockpit side panels and a great looking instrument panel. A separate two-piece radiator is included and it is visible from the front opening and through the open cowl flaps at the rear. The kit also includes interior panels in the wheel wells and correct exhaust pipes – three individual double pipes on each side. The surface detail is excellent. Panel lines are lightly engraved and control panel surface details are realistic.

As I mentioned earlier, the exhaust pipes consisted of three small parts on each side. I waited until I finished painting the model to install these parts. It probably would have been better to have installed these parts in step 4, before the fuselage was assembled. The parts are very small and one ended up lost somewhere on my workbench. Fortunately, I had an extra part in my stash and solved the problem.

My normal procedure is to assemble the basic airplane, paint the model and finally install the extra parts such as landing gear, pitot, prop and clear parts. In the case of this kit, the tail wheel assembly must be installed before the tail wheel gear doors or else a brace for the gear doors must be removed.

Two different style drop tanks and a bomb are provided with this kit. I chose to use the drop tank that was shown on the four-view drawing of my model. Four mounting brackets are provided and they fit into mounting holes on the bottom of the airplane. Before the glue is dried, test fit the tank to the model to make sure that all of the brackets are correctly aligned. It probably would have been better to use the bomb.

I wanted to add a model with a mean-looking shark mouth marking to my collection so I chose the airplane flown by Lt. Dallas Clinger of the 16th FS/ 23rd FG. This airplane had the meanest looking shark mouth and an interesting tail marking. It also was the most complicated to paint. The instructions indicated that the plane was initially camouflaged in the standard dark green/dark earth over a blue undersurface. This airplane apparently had suffered some damage so areas at the rear of the fuselage and the tail were painted in a lighter green and a very dark green. I used the four-view drawing provided, copied it to 1/72 size and then used it to cut the paint masking. I found some photos of Lt. Clinger on the internet and they confirmed the different colors and the tail markings. Special Hobby did a great job of research.

The decal sheet is printed by Cartograf and is excellent. The decals readily conformed to the contour of the model and even sank into panel lines. In addition to the major markings of the four different aircraft, the decal sheet also includes most, if not all, of the smaller maintenance markings of the P-40. Thirty-four different markings are provided, many of them in multiple copies.

One other comment relates to the propeller. The prop and the spinner go together into a great looking assembly. The only problem is that the shaft is very short and needed to be glued to the fuselage to maintain position. A longer shaft might have allowed the prop to be moved as needed.

As a final step, I added a radio antenna. This is not called for in the instructions but I found a great photo of Lt. Clinger on the internet and it showed the antenna clearly.

This is an excellent kit with lots of details but is still easy to assemble. I am very pleased with the final appearance of the model. It looks as good as I hoped it would. I can easily recommend this kit to most modelers with some basic modeling skills. My thanks to Special Hobby for producing this excellent kit and for providing it for review. I also thank IPMS/USA for allowing me to perform this review.