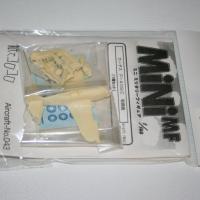 I became aware of Kami di Korokoro several months back when I was surfing through the HLJ site and happened to find that there was a 1/144 model of the TSR.2 available in Japan. I had to have it. It was cheap, and I bought it. The TSR.2 is paper. One of those projects I’ll get to some day. I also got this all-resin 1/144 P-40 from HobbyLink Japan.

There’s really not much to this kit as far as parts go. There’s the fuselage/wing/stabilizers and the canopy, propeller, main gear, tail wheel and the doors. Decals for an AVG P-40B and a USAAF P-40C of the 97th Pursuit Group are provided.

The intricate part of the project is getting the small parts off the mold carriers and the sprues. The leading and trailing edges of the wings are attached to pretty heavy pieces of resin, and I had some trouble determining where the prop blades ended and the excess resin began. The biggest help here, and something I want to commend Kami on, was that the painting instructions had top views of the aircraft in 1/144 scale, allowing me to see exactly what the wing leading and trailing edges should look like after the excess was removed.

After getting the parts in shape, it’s always necessary to closely inspect a resin model for bubbles. I found two on the top of the fin/rudder, which were easily filled with Mr. Surfacer 500, and then the excess removed with Mr. Surfacer thinner on a cotton swab. No sanding required. If you look at the picture of the parts above, the canopy looks like a blob of semi-transparent resin. Take hope here. When I dipped the part in Future, it became clear enough to see through. Since the canopy part also fills the cockpit, I didn’t bother adding a seat, stick, and panel. The canopy isn’t THAT clear, thank you.

After painting the aircraft in Forest Green and Neutral Gray, I added the tail wheel and main gear. The doors were not easy, as they are incredibly small parts, but I managed to get them on. I owe whoever invented CA accelerator a thank you.

The decals are, of course, miniscule. That’s smaller than tiny. The colors are all in register, and the decals are correctly sized. I had some trouble with the shark mouth, as I discovered the decal sheet is one continuous sheet of decal film, and each decal has to be closely trimmed. The shark mouth decals are in 2 parts on each side, and have to be separated to fit correctly. This was a challenging cut. The markings came off the sheet cleanly, and stood up to handling without breaking, folding or tearing.

Recommended. It’s not cheap, but it’s pretty accurate. If you’re going to do a 1/144 P-40, this is the best one I know of. I was going to build the old Crown/Revell P-40N as a “compare and contrast” model, but it really was not worth the trouble.

Thanks to Dave, who bought this kit from HLJ, and let me build it for this review.

Only 2 bubbles in the entire model