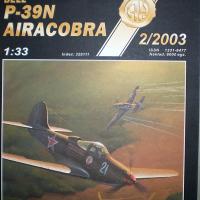 The P-39 was a marvel of engineering with a mid-mounted engine and a primary gun firing through the propeller hub. Because the US Army Air Corps wanted to save money, the supercharger originally fitted to the prototype was removed. This decision almost doomed the aircraft. The US no longer wanted it for a fighter role and the British summarily dismissed it altogether. Many of the airframes went to the Soviets under a lend-lease agreement where they found their niche as ground attack aircraft and low altitude fighters. This particular kit represents one of those lend-lease aircraft.

For the uninitiated, Halinski paper models are often referred to as the “Tamiya” of paper models. They are that good. Anyone who thinks paper models cannot rival plastic needs to experience one of these before making a conclusion.

The model comes in A4 book size and is computer drawn. Instructions are provided in Polish and an English language insert was provided for those of us challenged by the Polish language. Four full pages of construction illustrations are provided. The model was printed with impressive texturing (worn paint, stains and shading) which adds immensely to the end result.

With the exception of the trailing edges of the wings, the fit was excellent. Construction illustrations were comprehensive and clear. Some subassemblies appear complicated at first but surprise the builder with ease of assembly. Build time was a little over two months, due to the number of parts.

The landing gear wheels were the most impressive aspect of the project. Each tire built up with multiple layers of cardboard parts. Tread was introduced through different diameters of these layers. Some shaping with sanding sticks to round the tire edges resulted in very nice tire assemblies. These are the only assemblies that had to be completely painted to look right.

In addition to the printed parts, the additional materials are needed to complete the model: 1 mm cardboard, 0.5 mm cardboard, Bristol board (thick card stock), and various diameters of bead wire and plastic stock.

I really enjoyed this build, but found that its intermediate difficulty rating was appropriate. As such, I will only recommend this kit to those with some paper model building experience.

I would like to thank IPMS with the opportunity to provide this review and also thank Halinski for publishing such a great model.