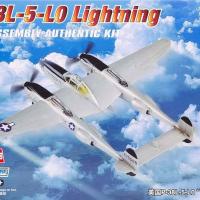 I doubt the P-38 Lightning needs any introduction to modelers, as it has been a favorite of many of us for a long time. This Hobby Boss release is one of their latest in the Easy Build series of 1/72 scale kits and is a late-war -L version. It’s a reasonably priced kit with excellent surface detail and markings for two aircraft. The four-page fold-out instructions are straight forward, easy to follow, and have a full color paint and decal guide. Color callouts are for Gunze Sangyo, Vallejo, Model Master, Tamiya, and Humbrol paints. As an Easy Build kit, there is a low part count and it is designed for quick assembly. If you thought construction begins with the cockpit, you are correct. The cockpit, though, has more detail than the other Easy Build kits I’ve done, since it has a separate instrument panel, seat, and control yoke. There’s plenty of room for additional detail, though. I added a couple of rectangular pieces of scrap plastic to enhance the flat area behind the pilot’s seat and the side walls of the fuselage. Tape seat belts and shoulder harnesses did the trick to finish off the cockpit.

Construction proceeds quickly. Since the booms are integral parts of the wing, you do not have to worry about alignment. Fit throughout is generally excellent, with only a few areas needing sanding and filling. One such area is the joint between the booms and the vertical stabilizers. The stabilizers were slightly wider than their mating surface on the booms. Minor filling and sanding around the engine nacelles will ensure a smooth contour in this area. Although I followed the instructions, I did leave the landing gear and gear doors off until the end. Hobby Boss has you add 12 grams of ballast split between the two engine nacelles, since this model, like other P-38s, is a notorious tail-sitter. I removed the posts inside the nose section, just forward of the cockpit/nose wheel well, to make room for about eight grams and put four grams in each nacelle, which distributed the weight a little more.

It’s interesting how Hobby Boss came up with a mixed bag as far as accuracy is concerned. Overall shape and measurements are almost spot-on. Even the underwing dive flaps added to the real -L version are molded onto the lower surfaces of the wings, but other things are missing, thus leaving a little work for the modeler to create a more accurate model. The kit does not have the two prominent supercharger ram air intakes on the outboard sides of the booms, just ahead of the radiators. I foraged my spare parts box for two small bombs which I cut to size and drilled a hole into the flat-edged front. Academy’s P-38 kit provided the guide to size and shape. Also lacking is the landing light in the leading edge of the port wing and the radio mast under the nose ahead of the nose wheel well.

There are two clear disks for the inside of the engine nacelles which I did not use. They didn’t fit very well and on the actual machine this area is a polished disk – almost a mirror. The pilot would look here to make sure the nose gear was down for landing. I filled the depressions and later covered them with disks of shiny Bare-Metal foil.

Both decal options are for natural metal aircraft. I painted the model with Alclad products, starting with their Gray Primer & Microfiller. I did pre-shade the seam lines and some panels with flat black to break up the monotone look. For the anti-glare panels, I sprayed Gunze Sangyo’s H-78 Olive Drab. Check your references for the shape of these panels around the engine nacelles.

As they did with some of the aircraft’s parts, Hobby Boss didn’t provide all the decals for the version I chose – Miss Bowlegs from the 431st FS. The bright red tails and boom stripes attracted my attention, but the decals only covered the outside surfaces. While not totally conclusive, my references showed markings on both sides of vertical stabilizers and booms. I resorted to using the AeroMaster sheet 72-163, Lightnings in the Sky, Part II, for decals in these locations. Overall, the kit decals worked well, but you’ll need lots of setting solution and some prodding to get them to conform to the compound curves of the radiators and, particularly, the nose cone. The black panels with the red trim on either side of the cockpit are not on the decal sheet either, and were taken from the AeroMaster sheet as well.

Final assembly was problem-free. The clear canopy fits like a glove and the gear insert positively into their respective wheel wells. Hobby Boss did a great job with the main gear doors. They come as a one-piece assembly that slides neatly into the sides of the main gear wheel wells. No worries here about proper alignment.

I enjoyed this build and am quite pleased with the result – it was, in fact, an easy build. This kit can be built by the novice who wants a P-38L on the shelf quickly. For the more detail-oriented modeler, you’ll have to scratchbuild some parts and deal with the incomplete decals. When you’re finished, however, you’ll have a nice-looking P-38L in your collection. My thanks go to Squadron for providing the kit and to IPMS/USA for allowing me to review it.