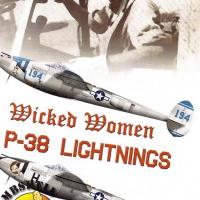 These are very nice decals produced for the P-38 Lightning. There are two complete sets of decals here including the stenciling. Three sets of national insignia are provided, one being in a faded blue. There is no need to cut around the solid color decals and some of the stenciling, since there isn’t any to be found. The decals are thin and shouldn’t sit in the water too long to soften up.

Federal Standard Paint Color specs are provided for the color schemes. All the decal markings are clearly pointed out on the illustrations, but the numbers on the decal sheet are so small, I had to use a magnifying glass to read them. Invasion stripes are not part of this package and have to be painted on. Thin white stripes for the tail markings are included, but if you’re going to paint invasion stripes, you might as well paint the thin stripes as well. I usually do.

Sheets of decals this size produced by other top quality companies are sold at one third the price, so you will have to justify spending the extra cost. This is a nice welcome to 1/48th P-38J models and I recommend this sheet to pick “Wicked Women”.

Thanks to Bombshell Decals for providing the decal set for review.