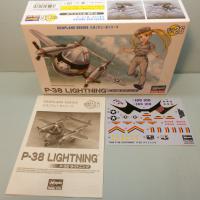 From the Hasegawa web page:

During the Pacific War, Charles MacDonald shot down 27 enemy fighters with his P-38, nicknamed "Putt-Putt Maru." These victories and his exceptional abilities as commander of the 475th Fighter Group made him one of the top Allied aces of World War II. P-38 Lightnings were the ideal aircraft for the Pacific; their long range, high speed and heavy armament let U.S. forces successfully engage Japanese planes at every turn.

This kit is a re-release of an older kit that comes packaged in a sturdy cardboard box with 1 bag of sprues, a single sheet of decals, and an instruction manual.

The instructions are on a single, foldout sheet with 3 steps for assembling the aircraft on one side of the sheet. The other side shows the decal placement and painting guide.

The parts are cleanly molded and there was only a little flash that was easily cleaned up on my example. There were a few sink marks on my copy of the kit on the sides of the fuselage and on the tops of the wings.

There were a few ejector pin marks in the wheel wells and back of the armor plate in the cockpit that would show after construction if not taken care of.

I started the construction by adding a styrene rod post in the nose and CA glued a nut over the post to provide nose weight before joining the top and bottom pieces, I wanted to make sure that I didn’t have a tail sitter. I found that the lower front boom pieces (parts 21 and 22) fit better if I swapped them around from where the instructions show them.

The guns in the nose are molded as elongated bumps that do not look like guns to me. I tried to clean them up and make them more rounded using a knife and chisel, but I made a mistake and accidentally cut one all the way off. I ended up drilling holes through the existing gun barrels and then sanded them all off. After final paint, I added some small electrical pins that I had in my stash to replace the barrels.

I did need a little filler on the joints between the booms and the wings as well as the filler over the sink marks. I didn’t notice the sink marks on the upper wings until after I painted the aircraft, so that caused me more work. Another issue I found is that the backs of the propellers/spinners (parts 6) have openings behind the prop blades (see picture). I filled these openings in with Magic Sculpt 2-part epoxy putty to complete the spinner.

Be careful with the nose gear (part 25), it is easily broken off (don’t ask how I know that), but it needs some filler around the base so it needs to be installed before painting. The rest of the assembly went quickly without any major issues. I left off the wheels, main gear, nose gear door, drop tanks, superchargers, scoops (parts 17) and horizontal stabilizer balancers (parts 23) until after painting and decaling. I also added masking tape seat belts to the seat. There is no control yoke in the kit.

I primed the aircraft using Tamiya gray rattle can primer. After that I applied Tamiya X-1 Gloss Black to prepare for the metal finish. I used Alclad Aluminum “ALC 101 for the exterior of the aircraft. For the interior and wheel wells, I used Vallejo Flames of War Medium Olive 850. I also used Vallejo Model Color Black 70.950 for the instrument panel and coaming. I found that Vallejo Model Color Dark Prusia Blue 70.899 is a good match for the blue in the decals. I used this to cover the area on the prop spinners that I filled in with putty, as the decals do not cover this area.

The decals went on easily using Microscale Micro Set and Micro Sol. I had some issues with the large, black decal that goes on the nose. The decal is one piece and has to go on a surface that is round. My decal broke into about 6 pieces while I was trying to position it, I am sure it is my fault in the way I was handling it. I did have to add some cuts to it to get it to conform to the curved surface. I also had to make a couple of cuts on the decals that go on the prop spinners to get them to settle around the propellers. The rest of the decals went on with no issues.

I made the base out of a piece of 0.080” thick sheet styrene. I drew an egg shape big enough to go under the landing gear on a piece of paper, cut that out and transferred it to the styrene. The PSP came from an image I found online that I resized and printed onto cardstock. I used spray adhesive to glue the cardstock to the styrene.

This was a very fun build with very few issues. These egg plane kits are great slump busters. I would recommend this kit to anyone.

I would like to thank Hasegawa, Hobbico and IPMS for giving me the opportunity to build and review this kit.

Model on base
Previous Next