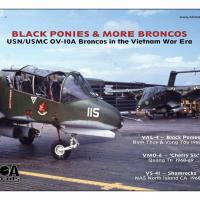 AOA (Angle of Attack) decals: New on the block, and focusing on Marine Air … We sincerely appreciate this new decal manufacturer sending IPMS/USA their latest releases for review! (…and the usual thanks also to IPMS USA Reviewer corps leadership for sending these my way.. )

The two sheets being reviewed were provided in the same package; I don’t know if this is the common delivery method.

This (32-004) sheet covers a total of 21 different options for the OV-10A/B as flown by Marine and Navy Air in Vietnam. Included with this sheet was the stencil set, 32-005, which includes propeller warning markings, ejection triangles, etc…

And the enclosed stencil sheet (32-005) had the following (From AOA’s website):

Option to use 1 piece wing walkway decal or separate WALKWAY decals if preference is for painted walkway.

As a review item, I was very impressed with the decal quality and performance on the model. All stencils are readable, and the accuracy and level of fideilty to color and density was as good as it gets. The white markings did not allow background colors to show through… and the various color areas were opaque to the point they did not need any white backing (such as small lettering).

The airframe markings were not used on the review model I just finished; however, the stencil sheet was (as I had used the USMC markings on that particular aircraft.). That review is on a separate submission.

All in all a great Package from AOA decals, 10 of 10 for subject, presentation, and performance!

OV-10 with Decals 3
Previous Next