Our Route Has Been Changed 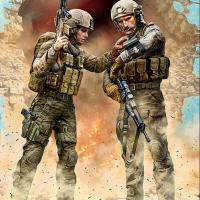 “Master Box Ltd. has a couple nice sets of plastic figures coming out. One of which is a pair of 1/24th scale modern infantry soldiers. Typical of Master Box, their figures are normally packaged in a setting. This one is called “Our route has been changed” and has two soldiers consulting a wrist mounted GPS/map pouch. One soldier is a female, which is nice to see for a modern look to the pair, and both are armed and wearing modern gear.” Or, so says Mike Lamm from Austin Scale Modelers Society in Austin, Texas. (from the Austin club's newsletter, The Sprue Examiner). Not that he is wrong....

This release is the first in Master Box's Modern War Series and as mentioned depicts two modern U.S. soldiers in full battle regalia. Both soldiers (Corporal Jessica Johnson and Sergeant James Haberson) are equipped with the latest in U.S. Army issue with weapons, helmets, ammo pouches, radios, and even microphones molded as individual parts. There are some extra bits on the sprues that go unidentified, chief among them is an individual ballistic shield.

Master Box doesn't provide any material for the weapon straps or the view port on the shield but your spares box should have something suitable to the task. Maybe some foil from a wine bottle (straps) or a piece of clear acetate (view port) will do? The box art does have a facsimile of the gray toned pix elated camo uniform pattern for your use. Or you may consult your own resources for a pattern that suits.

These 1/24th scale figures are divided into left and right legs, front and back torso, separate heads and arms. While the arms are separate parts there is a welcome exception. The arm(s) that hold the main weapon of each figure have an individual part for the fingers on that arm. This will help immensely with getting a realistic, proper grasp around said weapon.

There are three helmets on the sprues. One is an enhanced combat helmet (ECH) while the other two are the more common advance combat helmet (ACH). [Fun Fact: The ACH is being phased out in favor of the ECH.]

Individual weapons include a M4 carbine and a B&T APC 9 (compact sub-machine gun) and three types of sidearms: an M9 Beretta (holstered and unholstered), what looks like a Glock 19 ( holstered and unholstered), and an empty combat holster. The weapons suite seems to be lifted directly from Master Box Ltd. 'heist series'. https://www.mbltd.info/figures/1-24-scale.html

All of the plastic parts from Master Box exhibit lots of excellent, crisp detail. If you choose, you will need to source insignia and unit markings from the aftermarket crowd as there is nothing in the box that fulfills that need. [Shameless Plug # 97: Archer Fine Transfers or Authentic Decals may be of service?]

Assembly begins with the torso and legs, to which you attach the arms. Some figure modelers will paint the head of their figures separately before placing them on the body. My training (expert tutelage from Bob Bethea) has been different and everything gets attached to the figure. After dealing with any fit issues and mold seams the figure is primed and then the painting can begin.

I use acrylics to paint figures and there use almost requires that you securely attached the completed figure to a some sort of handle (working base). Otherwise the acrylics will just wear/rub off as you handle the figure during painting. I drill a hole in the foot of each figure, attached a metal, mounting pin and glue that pin into the working base. [Technical Note: working base is just a 2x2 piece of wood to which the figure is temporarily glued with a craft glue. I use Sobo.]

The legs on these modern military figures go together with barely a seam but the torso bits did present one that needed to be filled. Nothing major. I added the arms next and carefully glued the separate fingers to the right arms so that they gripped the individual weapons properly. With assembly completed all that is left to do is add some paint for the desired look. I did add an online image to the sergeants “Garmin” to fill in that void. I think that this pair only needs to ' turn left at Albuquerque' to get back on track. [Fun Fact: If you get that joke, give yourself an extra point.]

These modern soldiers look great and have lovely sculpting and rather easy assembly. Master Box Ltd.'s inclusion of a female war fighter is a welcome addition to the scale figure market place. If there is a complaint it would be that they are in 1/24th scale and not 1/35th but that is just a quibble.

My thanks to Master Box Ltd. And IPMS/USA for the review copy

Package back with painting instructions