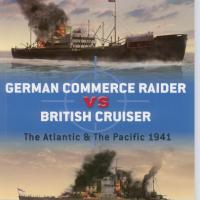 The idea of comparing combatants and combat actions from various historical conflicts is intriguing, whether real or imagined. This new Osprey publication provides a refreshing historical account of British cruiser encounters with German commerce raiders. A single Hilfskreuzer could sortie for a long time, disguised as a merchant ship, sinking commercial shipping. When caught by a British warship, the Hilfskreuzer often effectively exploited the element of surprise, in some case sinking a warship of superior size and firepower. Countering this threat was a challenge to the British Navy, who did eventually prevail over the raiders.

The book content is nicely organized with the following chapters:

The text reads very well, with a good balance of facts, stories, and illlustations. A reader comes away with a good understanding of this facet of naval history.

The book provides a very interesting historical perspective of the role of the commerce raider concept in World War II. I knew little about the modern concept prior to this book, and am pleased with what I learned. The raider concept began long before, as in privateering, etc., but certainly this book describes the last “big guns” style of this combat.

The background information highlights the somewhat weak condition of the pre-WWII British navy and how the Kriegsmarine exploited that condition. The British were unprepared for this style of asymmetrical warfare, but responded quickly to reduce the threat to commercial shipping from the raiders. As for the effectiveness of the German raiders themselves, they were tasked with three missions: sink enemy vessels, disrupt trade routes, and pull British naval resource from other areas. I found it interesting that the raider Pinguin was able to capture the entire Norwegian whaling fleet in the Antarctic on 14 JAN 41. The raiders accounted themselves very well against enemy warships. An excellent description of the action between the HMAS Syndey and the Kormoran highlights how effective the raider commerce guise was.

In addition to describing a different aspect of naval warfare, "German Commerce Raider vs. British Cruiser” suggests a modeling subject. What about a paired British and German raider or a raider in the masked and unmasked gun positions? A quick look through model sources didn’t show much for available kits, although I seem to remember a model from the early to mid-60s that may have been of a similar subject.

All-in-all this is a great read and addition to a modeling research library. The book provides a great starting point, should one be considering modeling one of these combatants

Thank you to Sarah Batkie and Kerri Serini of Osprey Publishing, and the hardworking duo of John Noack and Dave Morrisette for providing this book to enjoy and review!