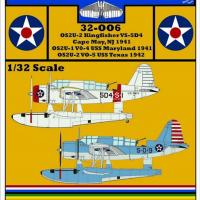 The colorful aircraft of the ‘golden age’ of Naval Aviation are some great looking aircraft. While this period was short lived it was also a time for the transition to war with the corresponding change of camouflage colors. One of the aircraft that went through this period was the Kingfisher. Designed pre-war it soldiered on throughout the war so the variety of marking options is quite varied. The new Kitty Hawk Kingfisher is a beautiful extensive kit that covers the aircraft quite well. Yellow Wings decals adds some flair to it.

Packaged in a 6x9 inch self-sealing ziplock bag, the modeler is treated to a heavy card stock cover page which includes full color side views of two aircraft. Behind that are three double sided pages of instructions printed in full color. The first page is an overview of how to apply the decals along with a color suggestion chart. This is particularly helpful when trying to match the decal colors. Each page contains some basic specifications of the aircraft. It is very similar to the marking blueprints from the National Archives where Yellow Wings gets its data from.

The first aircraft is an aluminum painted aircraft with orange yellow upper wings. For some reason the instructions mention the orange yellow but doesn’t show the color. This is just a minor issue but the markings are clearly laid out. The aircraft was assigned to Cape May NJ in 1941 with its colorful yellow orange wings, red stripes on the wings, fuselage and nose, along with the blue and white stars with the red center of the pre-war era.

The next aircraft is assigned to the USS Texas in early 1942. It is in the early war blue grey over Non-Specular Light Grey. It is quite colorful with the red and white rudder markings and the same early war insignia with the red center.

The decals themselves are printed by Microscale, so you know they are in good register and with good color saturation. Two sheets are printed on 5x8 decal sheets with the colorful markings perfectly printed. The third sheet is 4 3/4x 7 and includes the stencils and wing walks for three aircraft. While most manufacturers would only give you complete markings for one aircraft Yellow Wings gives you COMPLETE markings and stencils for all three aircraft.

Overall this decal sheet is very representative of the quality that I’ve come to expect from Yellow Wings. Thoroughly researched by Yellow Wings, printed by Microscale, and colorful options makes this a bargain for the modeler. The interesting marking options that cover the pre-war and early war makings makes this a winner.

Thanks to Yellow Wings Decals and IPMS/USA for the review copy. You can obtain your copy by contacting Yellow Wings at www.yellow-wingsdecals.com or your local hobby shop on online retailer.