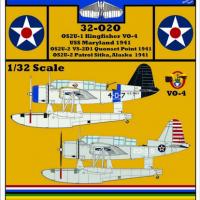 Yellow Wings is well known for their thorough research and excellent decals of traditionally Navy subjects, in particular from the ‘Golden Era’ of aviation. This particular sheet covers the time Kingfisher during the immediate pre-war timeframe.

Packaged as most decals are nowadays in a ziplock baggie, these decals are further protected by a heavy card stock title card. The instructions are included on three double sided 8.5 x 11 sheets.

The instructions cover all three aircraft. Each sheet contains a profile view, split view of the plan views and a head on shot. The specifications are included. These sheets look very much like the historical data from the National Archives.

The first aircraft is a Kingfisher assigned to the USS Maryland in 1940-41. The Black tail and blue unit markings, along with the yellow wing tops makes this a quite colorful machine. For some reason the upper surface of the wings are not shown in the yellow orange color. It isn’t a big deal as the important thing is the position of the markings anyway.

The next aircraft was used in mid-1941 and represents a transition to war color scheme. It is an overall Non-Specular Light Grey. The aircraft was attached to Quonset Point, RI in Mid-1941. This particular aircraft had the rudder red and white stripes which adds a splash of color to the single color overall.

The third aircraft is part of the Inshore Patrol Squadron at Sitka Alaska in early 1941. It has the yellow orange upper wings and a unique blue, white and red tail marking.

This is another great sheet from Yellow Wings. The inclusion of enough markings to do all three aircraft is the level of professionalism that this company exudes. Thoroughly researched by Yellow Wings from the National Archives and Dana Bell’s Aircraft Pictorial #3- “The OS2U Kingfisher” these decals are first rate. Since they are printed by Microscale you know they work with the Microscale system and most others as well. Another first rate product.

Thanks to Yellow Wings Decals and IPMS/USA for the review copy. You can obtain your copy by contacting Yellow Wings at www.yellow-wingsdecals.com or your local hobby shop on online retailer.