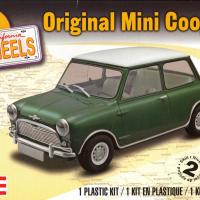 The “original” Mini was produced from 1959 to 2000 by the British Motor Corporation and its successors, British Leyland and the Rover Group, designed by Alec Issigonis and marketed under the Austin and Morris badges. The Mini Cooper was the “Sports” option that was developed by legendary race car maker John Cooper. The key here is that not all Minis are Coopers although most Americans know the Mini line of cars as “Mini Coopers”.

This car kit has its origins in Europe, being first introduced by Revell Germany before being reboxed for the US market by Revell here in the States. The kit consists of just under 130 parts, molded for the most part in white plastic or white plastic coated with “Chrome” plating. There is also a clear parts sprue for the windows, headlight lenses and turn signals, along with four “rubber” tires, and a decal sheet. Ironically, despite this kit being marketed under the “California Wheels” series, and with the box top showing a built up kit sitting atop a map of California, the kit is lacking in California license plate decals!!

The instructions for this kit are very nicely laid out over 16 pages of exploded diagrams. Of great interest to me was a listing of each part in the kit, and a description of what it was, so that for those like me not totally familiar with automobile parts, I could easily work out what all the bits in the engine were! Painting information is called out in each Section of the instructions, and I encountered no errors in the instructions. The parts themselves are fairly well molded, though there were a few parts with sink marks and ejector pin marks. The parts also have the expected mold lines around the parts, which on the white plastic parts is no problem to remove and clean up. However, what about the Chrome parts? To remove the seam lines, you end up removing the Chrome plating? On the review model I touched up the missing chrome with Floquil Old Silver paint, but this was much duller than the shiny chrome plating. When I build a model with such chrome plating in the future I will strip off all the plating (soaking the parts in bleach will achieve this), clean up the seam lines and any sink marks or ejector pin marks, and then re-spray the parts with a product like Alclad Chrome.

The model comes with a fairly detailed engine, and assembling this starts off construction of the kit. Parts need careful painting before being glued together, as the engine compartment is very cramped, and you won’t be able to get a paint brush in there after the fact, so to speak! Make sure you test fit everything before applying the glue, and that you have the parts the correct way up, as it is definitely possible to glue things in the wrong way. Also make sure you follow the assembly sequence carefully, as for example you can’t glue in the engine compartment side walls and radiator to the chassis frame prior to gluing the engine in place.

The model contains parts to build either a left hand or right hand drive vehicle, so keep an eye out for the alternative parts for each version, starting with the assembly of the engine compartment. In assembly Section 5, part 29, the engine air duct, had a major seam line on it that without very careful clean up will result in damaging the fine corrugations. I also felt the part was too short in length?

The tires for the kit have decent tread detail, but incorporate a seam line that needs carefully sanding out. The quality of the rubber tire moldings is adequate, and not the best. The tires are matt in texture, which is very nice. Be careful when assembling the three part inner/outer wheel halves and brake unit, parts 50/51/52. There is a right way and a wrong way around to installing the rubber tires onto these units. Do it one way and you get a fairly flat tire where the rubber meets the road. Do it the other way, and you get a big ridge so that only part of the tread section touches the road. Also, for whatever reason, one of my rubber tires had a large “chunk” missing from it? Not sure if this was some sort of short shot or what, but thankfully I was able to install the tire in such a way as to hide this issue!

The cabin interior of the model is fairly well detailed with separate floor mounted gear shift, hand brake release, and a three pedal unit (brake, clutch, and accelerator). Again remember that you have a left or right hand drive option, so choose your parts accordingly. The console for the speedometer is a plastic part, with a decal, for decent detail. The seatbelts for the driver and front passenger are plastic parts (they mount to the door pillars), while those for the rear seat passengers are decals, which I don’t think are particularly effective, lacking dimension. Those of a more fastidious nature most likely will consider producing better detailed ones from scratch, perhaps from lead foil, suitably painted? I took a hobby knife and scraped away about a third of the plastic on the front seat belts, in order to thin them down, parts 63 and 67.

The hood (bonnet!) should be workable if you follow the construction assembly sequences properly. Mine unfortunately won’t be, as I wasn’t paying attention………….. I painted the main body unit Tamiya XF-3 Flat Yellow, mixed with some X-22 clear gloss. This turned out very nicely, and I left the hood and body to dry for several days to insure the paint was good and dry. If you look carefully at the box top built kit, or any good color reference photo, you will see the Mini Cooper has a chrome strip running from bumper to bumper along the base of the body shell. I agonized over whether or not to try to incorporate this on my review model, fearing that I would mess it up. Initially I thought of masking the area, and spraying the area a suitable “Chrome” color, but it was so small and curvy at the wheel arches, and I couldn’t find any masking tape that would “bend” around the curves. Then I remembered that a car modeler friend of mine is always hunched over his models, with Bare Metal Foil, a new blade in his scalpel, and a Q-tip, applying small sections of foil to just such areas on his models. Again, I agonized over attempting this procedure, but eventually decided to give it a try. And while in no way perfect, I managed IMHO to get it looking “okay”, and will definitely be working to improve this technique on future car projects. The body with metal foil was then sprayed with a couple of coats of Tamiya X-22 Clear Gloss to seal the foil.

The last part of assembling the model consists of carefully gluing on the various chrome and clear parts. I painted the rear brake light lenses Tamiya X- 27 Clear Red. I used Gator’s Grip Acrylic Hobby Glue to attach the chrome parts. This is an Elmer’s Glue looking adhesive that goes on white, but dries clear, and has quite good holding properties. Any excess can be removed with a Q-tip and water. The windows on the kit are a series of separate individual window pieces, rather than say a one piece window “unit” as some kit makers provide. They are very clear, and well molded. They probably should have been (very carefully) masked and then the “rubber seal” area airbrushed black. I myself didn’t do this. The fit was extremely good, with the parts being held in place by Testors Canopy Cement. The big plus of Revell’s windows in this kit is that they glue from the outside, so the windows can be installed last in the finishing sequence.

The decal sheet is well printed, with everything in register. As mentioned earlier, there aren’t any California license plates for this “California Wheels” series kit, but there is what purports to be a personalized Wisconsin “collector” plate that says “MINI”, an Illinois plate that says “COOP”, and what appears to be a pre-1994 West German personalized plate that says “MI-NI 998”. There are also country vehicle stickers for a number of European nations: F: France, CH: Switzerland, A: Austria, GB: Great Britain, B: Belgium, I: Italy, NL: Netherlands, D: Germany. But no license plates to go with all but one of them!!

Overall this kit builds into a decent model of the original Mini Cooper. The weakest parts of the kit are the rubber tires and their wheel hub parts. The tire seam is quite tricky to remove successfully, the rubber parts were a bit “rough”, and they could have been designed a bit better for a crisper look. However most of the other parts fit together quite nicely, were well detailed, and the clear window parts are particularly nice. The kit is also reasonably priced, and thus offers the modeler good value for their hard earned money. With a little TLC, a nice model of this historically very important car will result from the builder’s efforts. I would like to offer my sincere thanks to Revell for allowing IPMS USA the opportunity to review this model kit.

Shows Dust in Paint
Previous Next