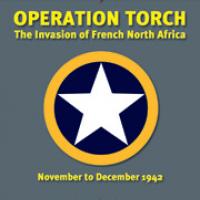 The Allies planned an Anglo-American invasion of Morocco, Algeria, and Tunisia, territory controlled by the Vichy French government. With those nations under Allied control, the Allies could carry out a pincer operation against Axis forces in North Africa. The Vichy French had around 125,000 soldiers in the territories as well as coastal artillery, 210 operational but out-of-date tanks, and about 500 aircraft, half of which were Dewoitine D.520 fighters. In addition there was a strong force of German and Italian military forces available.

The soft cover book is broken down into six parts:

This part includes a brief history of the Vichy air services in North Africa and the Mid-East, including the types of aircraft available. Several paragraphs address the evolution of the Vichy marking for the aircraft. Seven pages of color aircraft plans and profiles depict the camouflage and markings for the Curtis Hawk 75A-3, DeWoitine D.520, Potez 63-11 (one on the less attractive aircraft flown by any air force in World War Two), Douglas DB-7, Bloch MB 175 , and Loire et Olivier LeO 451.

Every type of current frontline operational FAA aircraft was used in Operation Torch, which also saw the operational debut of the Seafire Mk. Ilb. All FAA aircraft were marked with an American-style Torch insignia: a white star in a blue background, with a yellow surround. There was a great deal of strong feeling by the French toward the British after the sinking and damage of several French fleet ships in 1940. The Allies hoped the French would put down their arms and join with the Allies against the Axis, and the fake markings on the FAA aircraft were intended to fool the French into thinking they were facing only the Americans.

Again, there are several pages of narrative dealing with the aircraft types, actions, markings, camouflage colors, squadrons, and aircraft carriers involved in the action.

The US Navy’s area of responsibility was initially limited to the western portion of the invasion front. Initial air battles were against the Vichy French with both victories and losses. US Army L-4 Piper Cubs and P-40F’s were flown off carrier decks once several Vichy air bases had been captured.

Gibraltar became a large, fixed-in-place aircraft carrier in support of Operation Torch. At one time, over 100,000 Allied troops and over 400 aircraft were staged at the fortress. Over 30 squadrons of RAF and US Spitfires were stationed at Gibraltar.

Operation Torch saw the first American major aerial assault of the war. On November 7, the 509th Parachute Infantry Regiment flew in C-47’s from the UK, across Spain, with the intention of dropping near Oran and capturing several Vichy French airfields. The long range and poor weather was responsible for widespread scattering of the aircraft, and thirty of the thirty-seven C-47’s were forced to land in a dry lake bed west of the target. American fighters and pilots were soon blooded against the Vichy French and later against veteran German and Italian pilots.

The invasion forces planned to move east into Tunisia and quickly surround the Axis forces, sweeping them from North Africa. However, the Vichy French put up a more spirited defense than expected. That delay, plus the onset of winter, slowed the advance to the East. This allowed the German to move additional aircraft and land forces into the area. This part, as with the previous sections, provides additional history to the Axis involvement, along with several of the aircraft used by the Axis forces. There are a few profiles for the not very successful Messerschmitt Me-210A-1.

Each part includes several color profiles and plan views with descriptions and often a history of a specific aircraft and the pilots. The narratives offer a good deal of the history of the Torch operations, and make for interesting reading.

Overall, this was an interesting book to read and will prove to be a valuable reference source. I wish to thank AIRfile Publications and IPMS/USA for the opportunity to review this book. Anyone interested in the early involvement of American and other Allies and enemies during the North African campaign will enjoy this publication. The information included on the various markings and camouflage will be valuable, and modelers interested in aircraft will find this to be a valuable resource. Highly recommended.