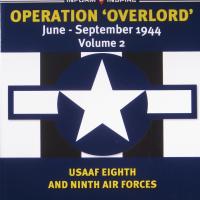 AIRfile Publication’s Operation Overlord, Volume 2 presents a wealth of illustrated aircraft profiles featuring various 8th and 9th Air Forces assets. The volume covers how they appeared in the lead-up, action, and aftermath of D-Day, along with a general overview of the distinctive markings (or more colloquially the "invasion stripes”) found on the various aircraft in-theater.

The book is divided into 3 sections. The first section begins with a general overview of the tactical situation in the lead-up to the invasion of Europe, and continues with a discussion of the various roles the 8th and 9th Air Forces would play, along with their various subunits. Attention is paid to the pre-invasion standard overall color schemes, as well as the standard group identification coloring, squadron geometric symbols, and airframe quick identification markings. Ultimately, the application of the distinctive markings before, and their subsequent removal after, the success of the D-Day invasions is covered in great detail. This is accomplished by citing both the official orders regarding application and removal, as well as surveying the historical evidence of the actual in-field applications and removals. Illustrated profiles of representative aircraft highlight the typical markings.

The second and third sections focus on the 8th and 9th Air Forces respectively, providing multiple full-color illustrations of various fighters, bombers, and support aircraft. Special attention is paid to the variations in the typical application of the distinctive markings, as well as the progression and modifications to them as the invasion progressed. Most aircraft are featured in a right or left-side profile; however, several more interesting subjects are presented in 4-view profiles. Each illustration is accompanied by a data block providing the aircraft’s group, squadron, serial number, base of operation, and pilot. A paragraph on each profile calls out the color scheme and any deviations from the norm; however, only the most basic of operational histories of the aircraft are provided, if any. The main focus within this text is clearly on the paint.

One thing to note is that Operation Overlord, Volume 2 relies entirely on illustrated aircraft profiles, and although the accompanying text indicates that most of the illustrations are derived from pictures, the book features no photographs itself. From a modeler’s point of view, I found myself wishing that the author would have provided detailed references leading to the photographic sources. However, armed with the aircraft data presented with each profile, I believe it should be easy enough to track down photos of a particular subject. Additionally, I would have enjoyed a bit more information on operational aspects, such as sorties flown by particular groups and aircraft during the invasion event, but this is likely somewhat beyond the author’s intent with the book.

Overall, Operation Overlord, Volume 2 lives up to AIRfile’s motto – Inform & Inspire. I derived a great deal of information on the various paint schemes and distinctive markings, and certainly found quite a few subjects that I’d be inspired to model! The book also has some great bonus features, such as before- and after-invasion maps of airfields and a list of each Air Force’s groups, squadrons, and aircraft types. Highly recommended to any USAAF WWII modeler or anyone with a general interest in aircraft markings.

Thanks to AIRfile Publications and IPMS/USA for the chance to review this book!