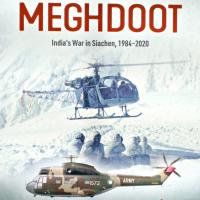 “It all started with few maps and an innocent German rafting expedition.” (Chapter 4, page 20). The war for the Siachen glacier sounds like something from a historical fiction book. One pundit called it two bald men fighting over a comb, but Operation Meghdoot was a 36-year-long shooting war fought at the highest elevations ever (up to 22,000 feet or ~6700 meters) between two bitter, next-door neighbors with nukes fighting over the largest ice mass on Earth outside of the polar regions. Where the weather killed many times more men than the enemy, and where China was ever a threat to intervene at the top of the world. Warfare rules were rewritten for constant cold weather and elevation, and helicopters were absolutely essential. This “operation” was mostly ignored by the rest of the world, and still has very large geopolitical aftershocks. Meghdoot is Sanskrit for Cloud Messenger, an apt moniker. You’ll be morbidly fascinated and impressed by rigors, horrors and human foibles and triumphs of this forgotten fight.

Sanjay Badri-Maharaj, the author of this book, is a native TTer (TT stands for Trinidad & Tobago, as they say on the islands), an Indo-Trinidadian. He studied at Kings College London, and received a PhD from the Department of War Studies, focusing on India’s nuclear capabilities. Sanjay was a visiting International Fellow at the Institute of Defence Studies and Analyses in New Delhi. He has authored other books on modern-day military topics from the Caribbean and India. Like his earlier book on the Islamist Insurrection of Trinidad & Tobago in 1990 (IPMSUSA review published April 8, 2021), Sanjay has unforgiving accuracy and incisive insights of the Operation, told through the keen eyes of a practicing lawyer. Keep in mind that he is Indian and studied this war intensely while it was ongoing.

This book is No 20 of the Asia @ War series by Helion, covering the last 80 years of conflicts in the largest, most populous continent. This 11.7 X 8 ¼ inch (297 X 210 mm) softbound book is four mm thick, with small print, color covers and four pages of color illustrations of personnel, equipment and a map. There are 66 pages, three Tables, 4 maps, 61 B&W photos, 5 color profiles of military equipment and 4 color illustrations of personnel.

This book is worth the cost just to find out about the rancor between Pakistan and India, and the threat China poses to India by being chummy with Pakistan. For example, China gave Pakistan a nuclear weapon capability, and both countries tested nuclear weapons in 1998. After humiliating wars won by China over India (1962) and India over Pakistan (1971). The author being of Indian descent tilts the book towards an Indian version of events because record keeping is available, and not forthcoming from Pakistani records not being available, and their falsification of accounts of events.

Prior mountain wars mentioned above set the stage for a Himalayan showdown overlooked by K2, the second highest mountain on Earth (also with the second-highest fatality rate for climbers). This area of the world has been in constant flux and ownership, and Operation Meghdoot is but the latest conflict to embroil the Kashmir region. Importantly, the Karakoram Pass connects China to Pakistan, threatening both India and Pakistan putting all these countries are arears over shaky territorial boundaries.

This book picks up when India saw Pakistan colluding with China in 1984 to push India out of the region for good. Due to the inhospitable nature of high elevation and forbidding climate, military activities were difficult at best. How India surmounted these obstacles to claim the original, agreed-upon Line Of Control boundary and occupy the commanding Siachen glacier position is the theme of this book. Most of the action centers around India’s occupation of the Siachen glacier, and Pakistani attempts to dislodge Indian troops.

Maintaining an active military presence on year-round frozen glacier at mountain peak altitudes for 36 years is impressive by itself. Helicopters were essential for supply and personnel rotations, and in spite of losses from the weather and environment, India won the war for supply and thus, holding on to territory. Both sides used military equipment from indigenous, Chinese, European, Russian and US sources, which makes for some interesting comparisons of hardware capabilities. Artillery was crucial and favored the defenders over attackers (which were usually Pakistanis). Hardships for the troops were extreme, and some attention was given to their day-to-day existence in this book.

The steps taken by both sides from 1984 to 2020 are outlined, with insight into the military forces of each country and the subsequent race to occupy the Line Of Control (won by India), the constant terrorist and insurgency campaigns by Pakistan, with a few skirmishes and an actual battle with hundreds of combat deaths on each side (the Kargill War in 1999). Interestingly, Pakistan has denied use of its regular military in the Kargill War to this day even though it was evident and proven – the Kargill War was the first media war for each country, and highly visible to both nations and the rest of the world. Unit actions are described for the Indian side. New tactics for high-altitude, low temperature, horrendous weather, habitation, logistical supply, modification of military equipment and training of troops showed this Operation has been costly to both sides, with the ever-present chance of a local conflict spreading to all-out war between the three nations, which fortunately has not happened, yet.

But the political machinations were also important and government upheavals in each country further derailed any serious attempts at forging pullouts, ceasefires or demilitarizations. India continues to hold the ground it occupied in 1984. The final chapter in this operation is yet to be written as escalation between India and China started in 2020 after Pakistan apparently gave up large-scale efforts to push India out of the region.

This book sheds light on a massive undertaking by India to secure its northwest border and control poorly demarcated territories that are still a source of local strife and unrest. Religion and political hubris still play a very large role in precipitating unrelenting hatred and revenge. The resolve of India and the poorly organized attempts by Pakistani forces and their proxies to oust Indian forces have maintained a fragile stalemate that still is ongoing, with the specter of Chinese military intervention looming. This forgotten region has large geopolitical ramifications, and is worth understanding.

Recommended if you want to generate nightmares about glacier warfare or nuclear winter. A sobering but fascinating look into a topic seldom dealt with in the US and Europe, which makes it all the more vital for our understanding, as this area could be the start of a nuclear holocaust.

Thanks to the author for scrutiny of this overlooked military and unusual geopolitical event, Helion Books for publishing this history, and Casemate Publishers for getting this book to us.

Thanks to Casemate Publishing & IPMS/USA for the review copy!

One of the color plates from page 8 showing Indian and Pakistani soldiers in typical clothing with missile and heavy machine gun armaments.

Pakistani troops on patrol along the Line Of Control in thigh-deep snow.

Map of the contested area of Kashmir with the Line of Control and other boundaries.

The heaviest transport helicopter used by Pakistan was the French-made Aerospatiale SA.330 Puma. Because both sides used similar helicopters, camouflage and circular national markings, the distinguishing feature of identification was the dark center spot on Indian aircraft versus the white center spot of Pakistani aircraft.
Previous Next