Operation DANUBE: Soviet and Warsaw Pact Intervention in Czechoslovakia, 1968 (Europe at War No. 7) 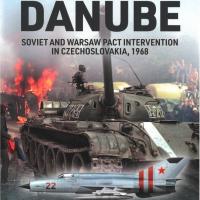 Several years ago, I had the pleasure of spending a week in Prague. Relatively untouched by the Second World War, I had a delightful time. While I had a general knowledge of what happened in 1968, I was not thinking about the sacrifices that the inhabitants of the city made. This volume fills that gap. Hellion Publishing has created a host of series that examine conflicts around the world, including Europe. This particular volume provides an overview of the Soviet and Warsaw Pact intervention in Czechoslovakia in 1968. As with other Hellion offerings, it follows a standard design and format. The text provides context and details of the intervention. Given what happened in 1968, I have never seen many of these photographs, so anyone with an interest in Soviet vehicles and equipment, it is a treasure trove of information. They also include a small selection of color photographs, profiles of equipment that took part in the intervention, and a map. Finally, it has a complete bibliography for those who would like to follow up with this tragic but important event.

While Czechoslovakia was considered part of the eastern bloc and Warsaw Pact, tied to Moscow and the Soviet Union, for many westerners, they would have been painted in the same broad brush strokes, in fact Czechoslovakia had a different pedigree than many of their neighbors. Before the beginning of World War Two, the country was a parliamentary democracy that was swept up in appeasement and the Munich agreement. In the aftermath of the war, it became part of the Communist Bloc. It seems the best way to characterize what was going in Czechoslovakia is that the government, led by Aleksander Dubcek, did not want to abandon Communism, but retool it to meet the needs of his country. This meant abandoning Soviet doctrine. The Soviet leader at the time, Leonid Brezhnev was not against change, but in the background was the Soviet reaction to what had occurred in Hungry in 1956 – a popular uprising against Soviet rule. In the case of Czechoslovakia, it was change from above.

As with most revolutions, there were tensions that Dubcek had to navigate – conservatives who did not want to rock the boat and progressives who wanted to push for wider reforms. There was a sense, in particular since the Soviet Union seemed to tolerate these changes, that they could move forward. In fact, conservative elements in both governments put a break on these reforms. There were two things that defined the reaction to Dubcek’s reforms – at its core, the Soviet Union was about maintaining control over its allies in the Warsaw Pact. In the end, there was absolutely no interest in allowing Czechoslovakia express any independence. Taking advantage of the split with the party, the Soviets and their Allies planned an intervention, though it took time to build a consensus over a plan for action. Given that the United States was at the height of their involvement in Vietnam, the chances of a western move to counter a Soviet/Warsaw Pact intervention was not going to happen. Dubcek was willing to work with and negotiate with the Soviets and their proxies, but once it became clear that there was really not going to be a change, the Soviets invaded.

Overwhelming force, the 1968 version of shock and awe, was planned and went forward without a hitch. With a combined force of Soviet and Warsaw Pact Forces, the combined force was able to quickly overrun the country and secure the major cities and airfields. It was a well planned and executed operation. There was little bloodshed. The country was secured. There was still civil unrest, despite the presence of Soviet troops and the establishment of a hard line regime in Prague, the seeds of the undoing of the Soviet Empire would be put in place. There was a cadre of leaders who would carry the spirit of independence forward to what would eventually lead to the velvet Revolution. Ironically, when Gorbachev became the leader of the Soviet Union, his reforms were inspired by the efforts to move forward with change in Czechoslovakia. Bottom line, while the Soviets had a resounding military victory, the seeds of change were sown.

Hellion is filling a gap with this work specifically and this series generally. While the occupation of Czechoslovakia did not trigger a wider conflict with NATO, it did lay the foundation for change. My thanks to IPMS and Helion & Company for giving me the opportunity to review this book.