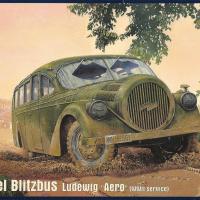 According to the blurb on the side of the kit box, the Opel Blitzbus Ludewig “Aero” was built during the mid 1930’s. The vehicle was made on the chassis of the Opel Blitz 3-ton truck in the workshop of the Ludewig brothers. The actual vehicle’s swoopy futuristic exterior lines were paired to a luxury interior and was not only used for transportation purposes but as a propaganda tool as well. Not many were produced due to the (even then) high cost of production. This particular kit represents the militarized version used for the transport of high ranking Wehrmacht officers on the Eastern Front during WWII.

The 6’” by 10” box features the dreaded end flaps, rather than a separate top. The box top features a cool painting of an olive green colored Aero ripping down a muddy road. Painting and marking instructions appear on the bottom of the box.

Once you do delve inside of the box, you’ll find 124 crisply molded parts in a medium gray styrene plastic, attached to 8 sprues. Two of those sprues are duplicate affairs providing tire/wheel assemblies and seats (along with additional parts). You also get a clear acetate sheet that has the windows printed on it - although you will need to cut them out as they are not scored. A small 1” by 1” decal sheet provides you with license plates and a few sundry markings. The instruction sheet is in black and white, providing clear, easy to understand assembly steps - 18 in all. There is also a parts map which indicates which parts are for the spares box - 30 of them. There are also Vallejo color call outs if acrylic is your thing. You get two color/marking options: one in a dark blue-gray; the other in olive green.

My first impression upon looking at the parts was how beautifully molded the parts are. They give a nice ‘look’ for the small-scale and do not look in the least ‘clunky’. The parts are all well cast and the long side body panels themselves are very nicely molded with no warpage, which should facilitate a good fit. Panel lines are nicely done in appropriate depths for their respective parts. For instance, the doors and the hood are engraved deeper and more prominently than say the fuel filler door. The interior parts and details seem adequate and good for the scale. I especially like the fact that the tires are the same styrene as the rest of the kit and not rubber.

This does look to be an exact duplicate of kit number 724 - Roden’s other Blitzbus kit - except for the decals. This however is, as mentioned, the militarized version, so it’s whatever you’re in to.

To be honest, I was quite surprised to see this vehicle in plastic. We are so inundated with same old Tigers, Sherman's, Panthers and the like and this subject is not only a pleasant change but it also presents an interesting and unique item for our display shelves. While I have been quite complimentary of the kit contents there were a few nitpicks:

All that being said, I have to say that this is a really nice little kit and despite some of the ‘issues’ mentioned, I would definitely recommend it. I mean, an Opel Blitzbus in a mass-produced 1:72 scale styrene kit for cryin’ out loud! How cool is that?

Many thanks to MMD-Squadron for supplying the review sample and to IPMS-USA for allowing me the pleasure of writing this review.

Windshield and Side Glass