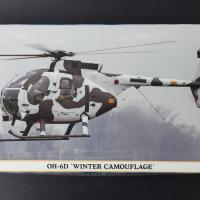 First flown in 1963, the HUGHES OH-6 is a light observation helicopter capable of carrying four at cruise speeds of up to 135 knots. The type is also known in the civilian world as the Hughes 500 series. A number of countries used the OH-6 including the Japanese Self Defense Force who used aircraft built under license as the OH-6D by Kawasaki Heavy Industries. That version is represented in this kit.

This is a limited-edition kit and comes in the now common Hasegawa top open box with a photo of the real thing on it. Inside you find high quality parts typical of this company with restrained panel lines and very good fit. Six resin parts are included that consist of antennas and a supplemental tail light assembly.

Construction begins with the cockpit and enough parts are provided to make it look busy through all the glass. I elected to use the figures as I'm trying to improve my painting skills on them. A nice touch is the box photo shows the front left seat instructor (or examiner) with a clip board and the figure replicates that. The only thing missing are collectives for the pilot and co-pilot positions and seat harnesses. I would have scratch built some collectives if I didn’t use the figures but I did add some harnesses on the rear seats. Decals are provided for the instrument panel and console. Make sure you open the holes for the antennas in the fuselage halves before you close them up. The instructions have a scale diagram to ensure correct placement. The upper windows are tinted. I airbrushed Tamiya smoke on the inside of the clear parts. Everything goes together quickly after that. The rotor assembly is not a precision fit. To ensure the proper alignment I drew an assembly diagram consisting of a circle divided into 72-degree segments and constructed the rotor over it till the glue set.

Things get interesting at the paint stage. This aircraft has a temporary winter white wash over the standard camo pattern. I decided to paint the model like the real thing. Matching the colors turned out to be easier than I thought. The rear windows have a small framed window port that comes on the decal sheets with the camo colors on it. I mixed colors to match using Tamiya XF-52 Flat Earth and XF-67 NATO Green. Once the base camo was done, I applied the decals. They settled right in with a little Solvaset although I don’t think you would have a problem without it.

This box top photo shows the white wash crudely applied with variations in color density and blocked out around markings. I brushed thinned Tamiya Flat White in two coats to replicate the effect. I added some antennas shown in the box photo made from guitar string.

In conclusion, this was a fun little kit of an aircraft I'd never built before. It went together easily and the resin parts are not intimidating for those who haven't used them before. The only problem I encountered was the serial number decal for the nose was a bit oversized for the space. I rate this one a 9 out of 10. Thank you as always to Hobbico for the sample kit and to IPMS for sending it my way.