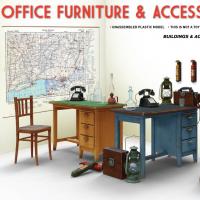 MiniArt seems to have its collective ear to the ground in terms of what they’re bringing to the modeling world, and this kit is no exception. Having dealt with dioramas with interiors, I know the frustration of rooms with little to no furniture. This lovely set is most welcome for that alone.

So what do you get for your money? The box comes with a number of opaque and clear sprues, all with some of the most delicate castings you’re ever likely to see (the phone cradle alone is most impressive), all of which make up into:

Assembly for all of this is pretty straight-forward, although some of the parts are unavoidably tiny, such as the little cranks on the phones. However, there’s really nothing that should be a major challenge to the average modeler if care is used. I was particularly pleased with the look of the kerosene lamps which utilize clear parts well. The fire extinguishers seemed a bit like overkill, but hey – to each his/her own.

Painting again was relatively straight-forward, although I found it easier to clean and paint some of the smaller parts while still on the sprues, especially the opaque lamp parts. Some care needs to be used on assembling the chairs, as the little back-to-front braces on the legs are tiny and rather fiddly. Ideally, you should use a little fuse wire on the phones but I let it go for this review. However, I’ll no doubt rig them up before putting these into my chosen diorama. Although the glasses have been well molded with three-part molds, you may or may not choose to ream out the tops for a bit more scale appearance, depending on how fussy you are about such things.

Amusingly, the one thing MiniArt left out of this office set is the one thing you see most in offices – paperwork. However, it’s merely a matter of moments to cut up a few pieces and scatter them on the desktops in an appropriately messy manner.

As you might guess, I really like this set – enough so that I’ve ordered their other furniture sets for myself and am looking forward to new releases along these lines. The level of detail is extraordinary and the usefulness of this kit is indisputable to the dedicated diorama modeler. Many, many thanks to MiniArt for providing this sample and to IPMS/USA for letting this old coot have some fun with it.

Posters and maps
Previous Next