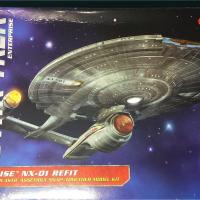 Star Trek: Enterprise was the last TV show from the Star Trek franchise. Based around the first “Warp 5” craft, the show highlights humanity’s first steps outside our solar system. As with many other Star Trek shows, the NX-01 Enterprise, was the starring ship. The ship was obviously not what many trekkies were expecting. Silver and lacking many of the things that were commonplace in Star Trek, it never filled the void or the expectations of the legions of fans. After the series was cancelled after 4 seasons, Doug Drexler went back and refitted the NX-01 to a more transitional piece between Enterprise and the Original Series’ NCC-1701 we all know of.

The kit itself is very simple, consisting of approximately 5 sprues molded in clear and putty-colored plastic. Essentially, this kit is a repop of the original NX-01 that Polar Lights produced several years ago. The new edition is what I would call a “refit sprue” that includes all of the parts to make the refit version. This sprue contains the secondary hull, deflector array and secondary pylons to attach to the existing NX-01.

The parts themselves are designed once again as snap-together. There is some flash evident on all of the parts, but not to any degree of extreme. The instruction sheet is a fold out design with very clear steps on how to complete the build. The decal sheet is once again the same as the original kit with options for the NX-01 Enterprise and NX-02 Columbia.

What is new for this kit is the stand. A very nice, wide and heavy stand is provided to display the kit. This is a massive improvement from the NX-01 kit of the past. Kudos to Polar Lights for including this.

The clear parts included are cleanly molded and should offer little difficulty.

This kit is not a difficult build. I have built the NX-01 before and this one should be no different. The ability to use this as a snap kit should encourage the youngsters as well. If you are a fan of the Star Trek universe, this kit is a no-brainer. I personally love the looks of this design much more than the NX-01 and wish that this would have been used in the production instead. A huge thank you to Round 2 Models for the opportunity to review this wonderful take on the NX-01.