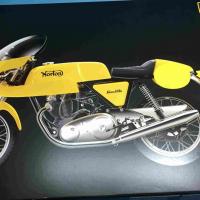 Introduction: I was very excited to have the opportunity to review this kit. I love the older motorcycles and this kit did not disappoint. According to www.Scalemates.com, the kit is a new tool. But I believe it is a reboxing of the old Protar kit from the 70s line the Norton Manx kit. The kit is definitely a product of the 70s era. The term "agricultural" came to mind as I was examining the sprues. Not to say it’s a bad kit at all...far from it, but it was tooled back in the day and it is not shake and bake. The kit comes on seven sprues and has two substantial rubber tires that hold their shape well. There are a large number of screws in various sizes as well. An interesting feature of the kit is the hoses. They are pre-formed in soft pliable rubber. No measuring, no cutting to length. There are a few minor sink marks on some of the body panels, but they are able to be sanded out with no filler. On to the build!!

Construction: I won’t lie, this kit was a challenge to build, at points I was concerned about being able to complete it, but in the end it all came together well. The engine went together with no issues and was able to be installed in the frame after the frame was completed which was nice. The transmission and engine were held together with screws and of course installed in the frame with more screws. Some of the screws were tiny so a small screwdriver (not included) is a must. There are two chromed plates that mount on the frame behind the engine and connect to the transmission frame and are mounts for foot pegs and the exhaust. Getting them on the correct position is vital to ensure everything else lines up. Getting everything mounted and in position was the most complicated part of the build. The rough nature of the parts (remember they were tooled in the 70s well before CAD) made it a challenge.

The spoked wheels went together well, but not as the instructions showed. The wheels are four parts each, the spoked inner halves and the outer rings. The rings had tabs on them that were supposed to interlock making a solid wheel. In my experience the tabs would not lock, too much stress on them, so I cut them back and simply glued the wheels together with epoxy. It was easier and made quick work of them.

The hoses were interesting and something I had never seen before. The main one was a full blown wiring harness with a main line and many lines shooting off it and going to various points. I'll be honest again...this was the coolest part of the build. I'm used to cutting individual hoses, so having these pre-done harnesses was new and a lot of fun to work with. The only downside is that there were mold seams in them that you cannot remove....but they are not really noticeable.

The front forks have metal shafts and the rear springs are real springs. The forks were tricky because the handle bars did not have a specific mounting location. You have to be careful that they are at the correct spot on the fork to ensure they exit the front fairing at the right point. I used the fairing and test fit it multiple times to get the location set. I used epoxy to mount the handle bars to secure them.

Final assembly was the touchiest part. The front headlight is mounted with the gauges and I really could have used three hands to line it up. That said, you have to line it up with faith that it will align with the fairing that mounts on afterwards. Some test fitting would help here. In my case it lined up, but not perfectly. I should have spent more time test fitting earlier in the build to make sure the angle I needed. The rear fender attaches to the rear bodywork with a screw and traps it on the frame. On mine, I had to put a lot of tension on the rear fender to get it to mate up with the body work and I worried that it would not hold. Fortunately it did hold with no real problem. The side covers were a bit tricky as well but fit well in the end. The rest of the bodywork fit with no issue, in fact the front fairing can be left as a loose fit with no problem! I had to use epoxy to get the exhaust to attach to the engine, there was a bit of torque required to get them to line up so anything short of epoxy would not hold them. I broke them both loose as I was working on other areas of the model, but in the end they are secure and look great. The last touch is the windscreen and for this I recommend PVA glue or Elmer’s white glue. I put a thin film of PVA on the windscreen and placed it on the fairing, no glue marks and it looks good.

Conclusion: This is not an easy kit to build. That said it is very rewarding and looks amazing when it's done. I can recommend this kit highly to anyone who loves the old British bikes or just wants to add something unique to their collection. You will need to have epoxy, CA and PVA types of glue on hand and it can be scary at times, but if you take care and make sure things are lined up, you will not have any real trouble. I want to thank Italeri for providing the kit and the IPMS review corp for letting me build it! Now I need to get my hands on the Manx!!!!

Back Suspension and Exhaust