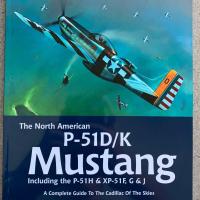 The Airframe and Miniature series by Valiant Publications gives the modeler and the enthusiast the most information and details you will find about a given subject.

When you first open the book, you will see the table of contents, then the preface. The preface goes over a brief history of P-51s from the B model up to the K model. There are also lists of USAAF and RAF squadrons that operated P-51s during and after WWII. The preface concludes with a run-down of which countries used the aircraft, how they were acquired and, their operational life.

Chapter one is the evolution of the P-51 from the XP-51D to the P-51K-20-NT. Each version of the P-51 has about a paragraph of information on the differences between models and a side profile.

Chapter two is about the evolution of the Photoreconnaissance, trainers, and projected production versions. With the same layout of chapter one.

Chapter four is about camouflage and markings. It includes colorized photos, color profiles, black and white photos, and a write up for each operator. Unfortunately the profiles are only side views. This chapter concludes with markings and camouflage for all operators of the P-51D/K

Chapter six has the expert kit builds. With all the information that you would want before investing in a kit. Builds include: 1/72 Airfix and Tamiya, 1/48 Airfix, Eduard, and Halberd, and finally the 1/32 Revell.

Chapter seven is “Building a collection” which has a more visual representation of the differences of each model from the XP-51D to the TF-51D.

I would definitely recommend this book to anyone building a kit or simply wishing to learn about late model P-51s.

Thank you to Valiant Wings Publishing and IPMS/USA for the review item.