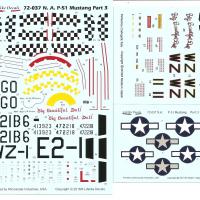 Lifelike is one of leaders in aviation decals with a unique variety of markings, usually hard to find subjects. This set covers one subject but six variants. I did not have a clue there were this many renditions of “Big Beautiful Doll” (BBD). Three restored P-51D Mustangs sported BBD markings over the years following WWII. Tragically two of these crashed recently, with one in 2011 where the pilot bailed out successfully after colliding with an A-1 Skyraider at Duxford England. The second crash in Arizona resulted in two fatalities in 2016.

The six subjects, all markings worn during WWII and flown by John D. Landers and two airframes include:

The instruction sheet gives a comprehensive history of each set of markings and notes to help replicate aircraft configurations down to details of main wheel tread type. The sheets are printed perfectly without any print register errors and very nice accurate colors. With six choices of markings, there are only enough markings to finish one subject. It may be possible to build both airframe subjects with this sheet if you use various aftermarket stencils and insignias.

I would like to thank Lifelike Decals for this review sample.

Great review Dave - I look forward to building Big Beautiful Doll - I'm leaning toward one of the checkerboard versions, though the yellow-nose Pony is pretty colorful and may sway me over!