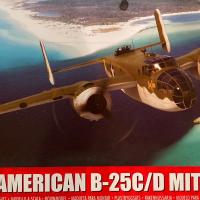 So often we see warbird models built to represent the battle-tested mounts of our aviation heroes. The subject of this review, the B-25 is certainly no stranger to famous pilots and war theaters. Underrepresented are the aircraft chosen for less glamorous tasks like domestic patrol, supply runs and training. With the help of Airfix and Iliad Designs, I have attempted to address that.

Airfix's rendition of the Mitchell has been around for a bit so I won’t give you a parts tour. Suffice to say, it lives up to the standard of the new generation Airfix kits. Recessed panel lines, detailed interiors, poseable control surfaces and hatches are features of this release. Fit and finish is almost too good in that a coat of paint seems to interfere with it. The bottom line, with proper care you can build a great model out of the box.

Airfix provides two marking options, both shown in full color, four-view drawings with color references. One is a war veteran on a war bond tour in a desert scheme and the other is an antisubmarine patrol aircraft operating out of Tampa Florida. The decals include stencils that I did use along with the aftermarket sheet.

I only had two issues during this build. First, once all the interior details were installed, I couldn’t fully close the joint behind the canopy and ended up with a slight step once the flight deck clear part was installed. The second issue was finding enough room for ballast to keep the model from sitting on its tail. I ended up gluing the model to the base I made. All of the paints used are from the Vallejo line including their Model Air products that come airbrush-ready from the bottle. Highpoints for me were the interior detail especially the bomb bay and the precise fit of the moveable control surfaces. The dropped flaps are engineered so you don’t have to guess the angle. Don’t let all those window frames scare you away. The frames are very sharp and easy to mask.

The markings are from an Iliad Design sheet#72019 (see separate review) and represent a B-25C assigned to an advanced training unit based in Columbia South Carolina in 1942. I’ve been to a similar field in Liberal Kansas where the various crew positions reported and were trained to work as an integrated team in (B-24s) before they were sent off to the shooting war. Not terribly glamorous, but an essential finishing step in what we call crew resource management now.

Overall, another winner from Airfix. The Lego-like instructions and precision fit make this one a quick build. I really appreciated the extra cowls and plugs for turrets and bomb doors as it helps with painting and modifying your Mitchell into different versions. Airfix has really transformed themselves from the kits this old guy grew up building and they still have a few new ones I intend to delve into. Thank You to Airfix (Hornby Hobbies) and to IPMS for the review sample.