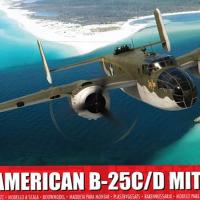 A versatile twin-engine medium bomber, the B-25 was to find its first fame on April 18th, 1942, as the Bomb Group led by Jimmy Doolittle flew them off the carrier USS Hornet and made the first attack on Tokyo. Mitchells were flown by many of the United States’ Allies, were used throughout WWII, and were in service up into the 1960s.

The new Airfix B- 25C/D was sorely needed in 1/72 scale. The kit comes in a sturdy box with nice box art and is cast in gray plastic with finely molded recessed panel lines. Although each sprue was individually wrapped in clear plastic bags, one half of my sample’s fuselage was warped, and this ended up being a challenge throughout the build. The kit comes with an option of an open or closed bomb bay, and if you decide to open it, 500-pound bombs are provided.

The kit includes a nice interior for this scale and also provides a choice of having movable rudders and elevators, but the ailerons are fixed. The landing gear can also be posed up or down, as may the flaps. I opted to build my model with the landing gear and the flaps down.

The fit is good overall and it’s nearly flash-free. I did have trouble with the warp in the fuselage as I closed up my bomb bay. Had I opted to open the bomb bay doors, there’s an interior insert whose added strength would’ve probably helped straighten it out. I had to cut off the nose gear door and glue it flush to the outside because it didn’t seem to fit alongside the landing gear leg like I believe it’s supposed to. Two different canopies are provided with slight differences in the windscreens, and two separate clear nose parts for different machine gun arrangements are also included.

There are two markings options provided by Cartograph decals, for one B-25C and one D model. I opted for the C which features a desert camo scheme. The decals worked fine using Solvaset.

The instructions are clear and detailed as are the decal instructions which are nicely done in color and are nearly frameable. A drawback is this that both schemes were for stateside airplanes and it would’ve been nice to have had some combat veterans included, but I’m sure aftermarket companies will take care of that.

The tires are slightly flattened to help the orientation of the wheels. Luckily this is prototypically subtle, not overdone---and looks good. I weighted my model so it didn’t sit on its tail but because of the glass nose, there’s very little room to get enough balance weight in it which won’t be seen after the kit is built. I put weight in the engine nacelles, nose gear well, and under the nose compartment deck, the tunnel, and wherever else I could find room.

Overall I really enjoyed this build and hope to do more of these new Airfix releases. I would like to thank IPMS and Airfix for the opportunity to review this kit.