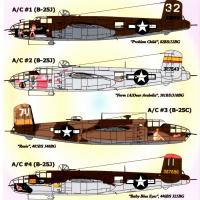 The North American B-25 Mitchell was one of the best Allied twin-engine medium bombers of WW II. It was dependable, simple to service and easy to fly. It was more angular looking than many of its contemporaries, but the Mitchell’s advantages made it preferable in most theatres.

Many of the B-25 crews in Italy, Africa and the Far East showed their love for their planes by decorating them with great markings. The noses of the solid-nose Mitchells were painted to resemble dragons, bats, tigers, sharks etc. The glass-nose Mitchells seemed to collect lots of pin-ups.

Lifelike Decals of Japan have recently issued four sheets of decals covering various B-25s. I chose to review part 3 of this group because I had a Hasegawa B-25J in my stash that I wanted to add to my collection.

This sheet contains markings for four interesting B-25s. They are;

The people who developed these decals for Lifelike must be aviation historians and enthusiasts. The description of each of the schemes is detailed and generally includes what happened to each plane. A list of references that were used during the development of the markings is provided along with special thanks to a number of people who helped provide information.

A separate sheet in enclosed which defines the changes in the size of the national insignia used on the wing and the fuselage over time. For example, “Rosie” had a smaller fuselage insignia. The set also provides two different paint masks. These are provided for “Baby Blue Eyes”. They provide the area behind the pin-up and behind the pilot/crew chief names. Decals are provided with the backgrounds or without them if the modeler wants to use the paint masks.

The decal sheets are very clearly printed and the colors are very rich. Three individual sheets are provided. The national insignia and the general aircraft markings are printed by Microscale while the pin-ups are printed by Cartograf. The decals were easy to apply and snuggled down to the surface readily. A couple of areas required some solvaset but the decals looked great. I am including some photos of my model. I still have some minor clean-up to do buy the decals show well.

As most can tell, I was very pleased with this decal set. It is well recommended, both for accuracy and for ease of applications. My thanks to Lifelike Decals for providing this great set of decals for review and to IPMS for this review opportunity.

B-25 Decals and masks