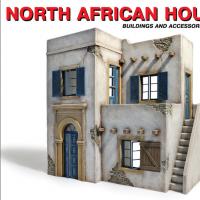 MiniArt has continued adding to their impressive array of buildings and accessories with the diorama builder in mind. Their latest offering takes them to the North African / Mediterranean theatre with the “North African House”. At 130 parts, this kit comes in a large box with multiple sheets of vacuformed parts and 3 sprues of injection molded detail parts (most of which will end up in the spares box as extras. My sample kits had a “bonus figure” set which unfortunately were not applicable for the building setting (although I am sure that the German “Stalingrad ’42” figures wished they were in North Africa during the Russian winter). Make no mistake; this is a substantial kit that makes up into a large building.

I don’t usually build vacuform kits, but I thought that I would give it a shot. As I started the laborious process of removing the parts from their vacuformed sheet I reflected on why I didn’t build vacuforms – I hate removing the parts from the sheets! Since I am an impatient sort I used my Dremel stylus and a thin saw wheel to make short work of this step. Once all parts were removed from the sheet I started the process of assembling the walls. Instead of using the more elegant ‘create tabs, clamp and liquid cement’ method, I opted for the brute force of PlastiZap and accelerator. Assembly of the house is relatively straightforward but requires the modeler to angle cuts at the corners – which is a tricky process. I was able to finesse (wrestle) everything into position using the floors as internal bracing. This allowed me to adjust the corners as needed before I set the corners with the accelerator. The one area that I had major problems with was the balcony – I managed to misalign one wall which threw of the final alignment. Fortunately it is not terribly noticeable and I doubt that these houses had perfectly square corners anyway.

The injection details were added next. The windows set into a single frame piece that slipped into the window space (conveniently covering the seam). The doors required 4 pieces to complete the doorframe which was trickier to align. The one major omission is the lack of ‘glass’ for the windows – not even a clear sheet was included so the modeler could cut their own windows. Since I was trying to finish this quickly for a review (for me quick is a relative term), I decided to leave the windows open. I did use a copier to ‘copy’ the injection sprue, creating a template to be used later to cut out window panes. The only parts that I replaced were the protruding beams. I opted for balsa wood in lieu of assembling the 2 vacuform halves for each beam.

Painting was straightforward using the box top as a guide. I was much heavier with the weathering since I figured that such a house would have taken a beating from sand and sun. I did not weather the interior of the house, choosing to leave it clean despite the open windows!

Overall this is an impressive building once assembled and it will serve well as a backdrop or centerpiece for a diorama. The large size makes it ideal for a multi-vehicle setting with plenty of nooks and crannies for detail and figures. My thanks to MiniArt for the review sample.

Close-up of back with detail added
Previous Next