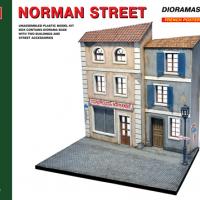 MiniArt has been prodigious in producing accessories for armor dioramas. Though I am primarily a ship and aircraft modeler, I couldn’t help but notice the endless stream of new releases in vehicles, buildings, and figures. So when this kit came up for review, I decided to take the plunge and try a new genre. I used to be a model RR enthusiast, so this was not my first building kit, but it certainly was the biggest in scale and size. What I did not realize until I received the kit is that it is one large vacuum formed model project.

The MSRP seems a bit high, but the box is packed with plastic, with enough plastic left over for the spares box. Most of the volume is consumed by the vacuum formed structure of the building. The structures have incredible detail, from the cobblestones to the terracotta tile roof, to the wood floors, to the exposed brick where the plaster has crumbled away. These are the nicest vacuum formed details that I have seen, hands down; club members were equally blown away. The little dimples over every surface are indications that a female molding process was used, where the soft plastic is pulled into the master. The injection molded doors, windows, and fittings take up a small portion of the box and are nicely made, with minimal flash and ejector pin marks. Everything is done in medium gray plastic. You also receive a nice variety of WWII era French signs and posters.

Starting the kit, I fell back on my vacuum formed model experience and a few tips I picked up along the way. I tore into the kit at a group-build night, using a new number 11 blade to remove the building sections from the surrounding plastic sheet. The plastic is close to .03 thick, so it was easy enough to work with, but stiff enough not to flex. First, I ran an extra fine tipped Sharpie along the edge where I was going to cut. This is to see what amount of plastic needs to be removed outside the black edge. I carefully cut each section out with the knife held at a 45-degree angle. The trick was cutting all around the window and door openings in order to remove the wall sections from the plastic sheet. I kept all of the plastic scrap.

Usually, the next step with a vacuumed formed kit is to sand the parts to remove the excess plastic and to get a good mating surface. I quickly realized that the wall sections were pretty large and would be hard to sand uniformly, so I decided to gamble and assemble the wall sections as they were. Next, I added plastic tabs to reinforce all joints. This was another project that I saved for a group-build night. The walls need a lot of tabs, especially around every side of every door and window. I used the plastic scraps I saved when I cut away the building parts to make the tabs. The key was to ensure that the tabs were plumb and would not cause a misalignment or a wall to bow out. When the tabs were dried, I fitted the halves of wall sections together; the fit was pretty good. I used Ambroid Pro-Weld for the tabs and assembly and tried to squeeze the parts together so that any gaps were filled. I was moderately successful; I still had gaps, but they were not critical and I filled them with CA.

During construction, I decided that I wanted a stepped curb rather than a sidewalk flush to the road, in order to add visual interest. I also noticed that the based had a lot of flex and needed to be reinforced in this area to ensure that I had a strong foundation when I glued the buildings to the base. I reinforced the based under the building with .125 x .250 strip. I also reinforced the vacuum formed edge with styrene strip. I reinforced the road section with a sheet of .03 styrene. This would also provide a good mating surface with the curb. Later, I scribed lines along the styrene strip facing the road to represent the curbstones.

With the based strengthened, I turned my attention to assembling the wall sections into buildings; I put the large building together separate from the smaller building with the idea that later I would glue the two building to each other. The walls are molded with a 45-degree angled mating surface. However, because of undercutting, the outer wall halves do not have the mating surface molded. I also found the side walls had a lot of flex, since they did not have the numerous window and door openings to stiffen the structure like the front wall sections. So, at each floor on the side walls, I reinforced each wall at the juncture of the floors using plastic scrap. I also added .125 x .250 strips along the side where the outer wall section mates with the front wall. The juncture of the front wall with the side wall was a bit problematic trying to get a good alignment; it took a lot of clamping to set the joints. Even then, I had some minor gapping that was later filled with CA. In the interior, I also had some gapping and filled these gaps with CA and accelerator. Once both were dried, I put the buildings together, using the base to adjust alignment.

Next came the assembly and the addition of the floors. The flooring has beautiful grain, but looks like unpainted wood that has been exposed to the elements for a long period. This is not typical of floors in an occupied structure. The other oddity is that the floor boards run the same direction as the floor joists. Because of these issues, I elected to make my own floorboards from .03 x .08 styrene strip. I sanded the floor foundation pieces to provide a flat surface for the flooring, and added styrene strip to reinforce the floor section and to provide mating surfaces for the floor boards. I then glued these sections into both buildings. I then cut the strip and added floorboards; trimming the assembly to match the angle of the building once it had dried.

I turned my attention to the roofs. Again, these are hollow assemblies that need reinforcement, so I strengthened them with .020 V-groove siding. This gave the underside of the roof a prototypical look, since the roofs of the period were made with planking laid across the joists to which the slates and tiles were fastened. Next, I dry-fitted the roof assembly and found that I had to add styrene strip to the tops of some walls to eliminate gapping. I then attached the roof sections. Another surprise is that MiniArt does not provide roof joists, so the roof kind of floats there. Before tackling the windows and doors, I scraped and sanded off all of the raised bumps from the vacuum forming process. This was a bit time consuming and left some small holes in a few locations which I filled with CA.

MiniArt is unclear on the placement of the doors and windows and how deep they set in the wall. I put them at the midway point and covered all of the seams of the two wall halves, saving a lot of time. My guess is that was what MiniArt intended. A dry fit revealed that the fit of the windows and doors is a little tight, causing the frames to bow. So I glued the windows and doors into the frames to form a strong unit. The single solid door had injection marks on the panels that had to be sanded off; other than that, little clean- up was required. I assembled them so that jams faced out the doors and windows swung inward. I replaced some of the center posts with strip styrene rather than clean up a straight piece of plastic off the sprue. Some European windows open out, so it’s your choice as to how to insert or pose them. For assembly, I squared off the corners of the window openings with a file, scraped and sanded the seams in the wall, and then sanded the door and window frames until they slipped into place. I used liquid cement to secure them in place, using a steel rule to ensure that they sat evenly. The largest window has roller shutters and inserted like the other windows. Curiously, there is no window for inside the shutters. Since I have a diorama in mind for the buildings, I left one window partially open. Unfortunately, MiniArt does not provide clear plastic for the windows and there are no indentations in the window and door frames. So, if you want glass, you will need to source some clear plastic, glue it on the inside, and add frames and mullions out of strip styrene. Windows will also need to be added behind the roller shutters if the room is to be viewed from the inside.

The last details were the wood trim at the roofline and the lamppost. The trim (fascia board) is provided on the vacuum formed sheets and I found that the quantity provided was insufficient, so I made up the difference with strip styrene. It helps hide the seam of the roof to the wall. The lamp post assembles without any surprises except that there are no glass panes or light bulbs/gas fixtures. I did not add the wood shutters since I plan to paint the walls before adding the shutters. I also left off the door handles until everything is painted.

The result is a rather impressive structure, both in size and detail. I placed a figure in front to give a sense of the scale. The interior is bare and will require more detail. I intend to add:

Also not provided in the kit, but needed, is interior trim – door casings, window casings, and baseboards. Included in the kit but not used – solid double doors, guttering and downspouts, a sign bracket, and additional windows.

Bottom line – MiniArt provides a lot of building and a lot of detail for the price. While this was a much bigger project than I expected, it is certainly a doable project for modelers with even basic skills. Recommended.

I’d like to thank Model Rectifier Corporation for supplying MiniArt’s kit to IPMS, and IPMS/USA for supplying it to me for construction and this review.

Doors and windows in place