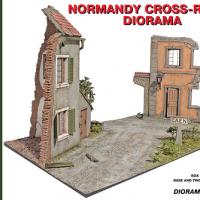 Another addition to MiniArt’s ever-expanding portfolio of World War II diorama shells is their Normandy Crossroads kit, depicting a crossroads in the ill-fated city of Caen, ravaged by Allied aerial bombardment in a vain attempt to dislodge entrenched Nazi defenders in June and July of 1944.

The kit is a mixed bag of vac-formed and injection-molded plastic. The base, building walls, and building roofs are vac-formed on 8 gray sheets, and the doors, windows, gutters, and other fixtures are injection-molded on 4 sprues of light gray styrene. Although shown in the box art, no ground cover is included, other than what’s molded into the base pieces. Vac-form detail level is adequate for the buildings and the roads, but the rubble and other terrain features is somewhat “soft” when compared to resin counterparts. The injection-molded parts are crisp, but are accompanied by a bit of flash which is easily removed. The only real negative attributable to the injection-molded parts is the huge mold ejection pin marks present in the troughs of the gutters.

Assembly is about as straightforward as can be for a vac-form kit. Fit and alignment of the wall halves is adequate – not great, but not hateful. I chose to assemble using super glue and baking soda (as an accelerator), and obtained decent results. To my chagrin, after I was well into the project, I learned a friend’s review of another MiniArt diorama noted that MiniArt’s website has assembly and painting guides for their diorama kits (Assembly Guide: https://miniart-models.com/wp-content/uploads/2016/05/36019_instr.pdf). Although the info was too late for assembly, the painting guide proved timely and most useful.

Injection-molded parts assembled generally well, but I had a fit getting the gutter downspout to align properly to the gutter and convincing attach points on the building wall, so I chose to omit the downspout for this review. Window frames also required a bit of sanding and trimming to fit properly in their wall openings – mainly due to my construction technique and the nature of the vac-form parts and seams.

I chose to not join my two base sections into a single unit, as I intend to use each half as independent armor diorama bases, as illustrated with the under-weathered M8 Greyhound in the accompanying photos. Should I get the hankering to make a larger diorama, joining of the sections should be fairly straightforward , including filling the seam and re-covering and re-painting the street.

All things considered, the kit builds up into a nice shell for an armor display base or full-blown diorama, and it sure beats crafting everything from scratch. Recommend for experienced modelers confident in fundamental assembly, finishing, and weathering skills.

Many thanks to MRC for the review sample and to IPMS/USA for the opportunity to present this review.

Gutters and other trim

Roof and other parts

Crossroads in context
Previous Next