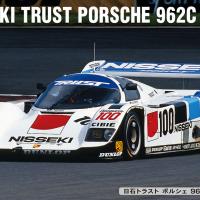 The Group “C” racing class ran from 1982 until about 1993. It was an extremely exciting series that saw some of the class cars run over 250 mph on the Le Mans' Mulsanne Straight (the WM-Peugeot recorded the highest 405 km/h / 252 mph). Porsche revolutionized the race series with the 956/962 cars and the associated aerodynamics and ground effects innovations. These Porsche vehicles were dominant for many years and were campaigned by both the factory and private race teams which, for modelers, allows for a multitude of paint and color schemes.

Hasegawa released the 962c series many years ago and has continued to rebox the same basic kit, with some body/aerodynamic modifications, in many different team liveries (I have at least four different boxings built or waiting to be built). The kit is a true “curbside” kit in that it has no drivetrain detailing and little to no suspension parts. It can be built quickly and with little fuss. The only part of the build that needs real attention (puttying, sanding, repeat) is the bottom of the rear wing. There are multiple spacers and supports/adjusters that are glued to the bottom of the wing and these have some gaps that will need attention. Also, the fit between the top and bottom halved of the spoiler are not the best, even with dry-fitting and adjusting. It took me two fill and sand sessions to get a clean, void-free assembly. This entire assembly is also best left off of the car until after the body painting is completed. With it installed, it makes it very difficult to get good paint and clear coat coverage in several areas on the rear of the car (this lesson was learned on my first build of this kit). The clear parts, specifically the large windshield and the side windows, were not as smooth and clear as I would have liked them to have been. I compared the clear parts in this boxing with a couple of older boxings and the current set is suffering in clarity. A few dips in Future greatly improved the appearance and clarity though, so it’s not a show-stopper.

As there is no engine detail at all the entire back section of the car is empty. To help reduce the “see-thru” effect, I painted the entire interior a semi-gloss black. A small blocking plate was also added to the rear area where the bodywork is open to the empty interior (this was an extra five minutes of work) and painted more black.

With these types of kits, I like to get the body sorted out and painted prior to attaching it to the chassis. A goof in following the instruction, during assembly of the body parts, caused some additional work later, during the decaling step. The instructions indicate that two small front corner air dams are to be cut from 1mm sheet plastic (a pattern is supplied on the instruction sheet), but the few pictures of this vehicle I could find showed the ramped front air dams (as supplied in the kit) so they were used instead. Aerodynamic features on these cars would often change from race-to-race, based on the track, so you have to research carefully if you’re working to replicate a specific car at a specific race.

For color, I used Tamiya Fine Gray Primer (shows defects better than the white primer) followed by Tamiya Pure White rattle can lacquer. This paint has been a boon to me in building auto kits as it’s very forgiving and levels out very nicely.

The interior is pretty simple also, though the instrument panel looks quite nice with the instrument decal and a little careful painting. The driver’s seat could do with a set of seat belts (none supplied in the kit) so I pulled a set of Eduard pre-painted PE belts out of the stash (these were previous review items and are quite nice). There are quite a few small pieces to each belt, but they look very nice once in place on the seat.

On to the “star” portion of the kit: the decal sheet. The sheet is almost as large as the box bottom and has 80+ decals to apply. I didn’t see anything indicating these were printed by anyone but Hasegawa, but unlike many other Hasegawa decal sheets, these had a relatively thin carrier film and, when placed in warm water, came off of the backing sheet within 20-30 seconds. The blue box markings, covering approx ½ of the car, are actually 9 separate decals for each side. Getting all of these aligned properly was difficult, at best, and left a few small gaps at the overlap points. Unfortunately, Hasegawa didn’t add any small patch pieces for the various shades of blue (this would have been SO helpful). I was lucky to find a couple of acrylic paints (one Tamiya and one Gunze) that matched closely enough out of the bottle, so a bit of patch painting was done. On the front of the car, there is one decal, approx. 6 inches in length, that goes from the back of one fender well, around the entire front and then to the back of the other wheel well. As one piece, this just wasn’t feasible so I cut it into five parts. One of these parts is where my earlier build goof came back to bite me. With the incorrect front air dams installed, the decal was too short and of the wrong contour to cover properly (I ended up clear coating and then patch painting some black). Oops! Overall, the decals do conform quite nicely, using Micro-Set and Micro-Sol. Initially Gunze Mr. Mark Softer (decal setting solution) but this actually caused some bubbling in the decals (maybe too strong?), so that led me back to the other solutions. One thing of note, once the decals are in place, they were quite brittle on any edges. In several cases, I managed to knock some “chunks” out of them that required later attention.

Once all of the decals were in place, a few coats of Tamiya Clear (they don’t define this a Gloss Clear, just Clear) and the decals were nicely sealed and almost uniformly glossy. As a side note, I opted to try Testors “One Coat Lacquer : Wet Look Clear” on the rear spoiler (one big decal on the top and one on the bottom) and had really bad results. The clear coat bubbled up, after applying a couple of light coats, didn’t level out much at all, and caused the decal to crack in several places. I have no idea if this was a bad can of clear, but I will not be using that paint line again.

The last bit of decaling was for the tires. Per the separate instruction sheet, the Dunlop decals are supposed to be dry transfer (they instruct you to lay the sheet on the tire and rub with your finger). No joy. There’s no mention made of removing the thick backing paper either (discovered this by accident). Ultimately I laid the decal against the tire, with just the thin paper, applied a bit of water via a Q-tip and then they adhered to the tire with no problem. A little Micro-sol was applied, after they decals dried out some, and they looked quite good.

The wheels require a couple of colors and I opted to Testors buffing aluminum metallizer paint for the aluminum portion (buffed up with a Q-tip) and Tamiya gold leaf for the center section. I was quite pleased with the end results.

The final assembly was simply gluing the chassis to the body and the kit was done.

Overall a nice kit that can be built quickly and teach you new decal techniques all in one box. Big thanks to Hasegawa/Hobbico and IPMS USA for trusting me with the build on this kit and allowing me the privilege of adding another colorful Porsche 962C to my collection.