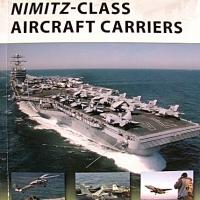 In this new offering from Osprey Publishing, author Brad Elward (and Illustrator Paul Wright) introduce the reader to the fascinating world of the Nimitz-class aircraft carriers of the United States Navy. Having served aboard the USS Dwight D. Eisenhower (CVN-69) and USS Abraham Lincoln (CVN-72), I quickly volunteered for this review when the book came out in a review list. As I possess a fair amount of knowledge on this subject myself, I am always looking to learn more about these magnificent ships, their history, and where the Navy plans to go in the future.

After a half-page Glossary on page two, the “Contents” on page three inform the reader of the six main sections of the book, which are the “Introduction”, “Origins of the Supercarrier”, “Design and Development of the Nimitz Class”, “Operational History”, “Bibliography”, and “Index”. The Design and Development portion is further divided into eleven areas covering topics such as the flight deck, the hangar bay, the island and significant inner structures, the carrier air wing, and propulsion and power plant to name a few. Within the pages of the book, there are forty-seven photographs (only three of which are black and white) and nine drawings (one of which is black and white showing the cancelled USS United States (CV-58). Two of the drawings are prints, one of which showing the LSO (Landing Signal Officer) platform with an F-14 Tomcat preparing to land and the other being a Catapult Officer and catapult operator preparing to launch an EA-6B Prowler.

In case you were not aware, the Unites States Navy is celebrating one hundred years of Naval Aviation this year, and this began on November 14, which marked the date that Eugene Ely took off in his Curtis A-1 from the light cruiser USS Birmingham (CL-2) in Hampton Roads. He would reverse this feat in San Francisco on January 18, 1911, by landing on a makeshift deck on the armored cruiser USS Pennsylvania (ARC-4). The first aircraft carrier of the U.S. Navy was the USS Langley (CV-1), and was a converted collier that was commissioned on March 3, 1922. The first U.S. Navy aircraft carrier that was designed as such from the keel up was the USS Ranger (CV-4). The carrier has clearly taken a tremendous leap when comparing the early ships with what the behemoths of today have become.

As far as the writing is concerned, the Introduction provides a nice concise history of the origins of naval aviation, and the development of aircraft carriers. There is then some discussion of the carriers of the Second World War, and the designs that followed, which eventually led to the Supercarrier. Of course, the first aircraft carrier to utilize nuclear reactors was the USS Enterprise, but this is a single ship with its class, and having seen several carriers during my time in the service and after, you can readily identify it. After the Enterprise, the USS America and USS John F. Kennedy were built, and these were similar in appearance to what was soon to follow with the USS Nimitz.

There is a good amount of detail that is provided in the text in regards to many of the aspects of the Nimitz-class carriers, and I will not go into those details here as part of my review. From what I recall, I will state that the information is well researched and accurate. There is even a fair amount of coverage on topics such as the Fresnel lens used to aid the aviators in bringing their aircraft back to the carrier, weapons systems, and the real heart of the ship, the propulsion system.

The book turns its attention to the actual ships after a discussion on the operational history of the class as well as mentioning the next class of carriers (the USS Gerald R. Ford, which is under construction now). The book then goes through the stories of each of the Nimitz-class carriers with short write-ups, and a table of important dates in the ship’s life. The tables provide the year that funding was authorized, the year that the keel was laid, the year that the ship was launched, the year of the commissioning, and the nickname of the ship (ones that can be printed in a book that anyone can read, not what we sailors called them).

As with other Osprey books in my collection, this latest offering is well written, and the author has penned five other books in addition to writing over twenty aviation articles for different publications. The photographs and drawings are all nicely done as well, and one drawing shows an artists rendering of the internals of the USS Nimitz itself (although the real lay out of these ships is no doubt classified, I will just say that it is off quite a bit). I was a little surprised by the two full-page drawings of the catapult launch and landing scenes as I personally would have preferred photographs of the real events, but this is just my opinion.

Overall, I would highly recommend this book to any modeler wanting reference to the aircraft carriers of the Nimitz class, or to any person who is interested in the history of aircraft carriers as a whole. The art and photography are very good, and again, the book is well written and informative. I would like to thank the folks at Osprey Publishing for providing this book to the IPMS-USA for review, and I greatly appreciate having been afforded the opportunity to write this appraisal. As always, thanks to you the reader for taking the time to read my comments.