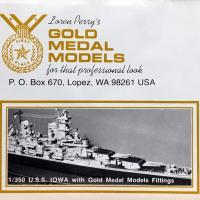 Loren Perry’s recent retirement and subsequent closing down of the Gold Medal Models photo etch line produced many long faces in the modeling world, particularly in the model shipbuilding community. For many of us, Gold Medal photo etch was, and is, the “gold standard” for ship detailing sets. When Squadron Hobbies purchased Gold Medal Models remaining stock, and announced resumed production of Gold Medal sets, there was, as they say, much rejoicing.

This particular set is for Tamiya’s modernized USS New Jersey kit, primarily the 1982 version. Parts are also included for the 1968 version of the ship, but major kit modifications would be needed for that incarnation. The 6 3/4” x 9 3/4” brass sheet includes standard ship features such as vertical and inclined ladders, watertight doors and railings, including railings to fit the class’s upswept bow. Also provided are funnel grilles, mast details including SPS-6, SPS-10 and SPS-49 radars, stern crane and cables, flight deck safety netting, AH-60 helicopter rotor blades (extended and folded), bridge windows, plus boat rudders and pulleys and other smaller details.

This set, like all Gold Medal brass that I’ve used, is thin but sturdy and easy to bend and shape. Longer pieces like railings stay flat when cut and are not inclined to curl. Some of the pieces on this set are quite thin, like portions of the antennas, as well as the netting and life raft racks. Each minute attachment point, even on he smaller delicate pieces, is easily cut with a sharp Exacto blade (I find the curved No.10 or No. 25 to be perfect for this). I also particularly like Gold Medal’s assembly instructions - they’re comprehensive and extensively illustrated.

It was a sad day for modelers when Loren Perry announced his retirement, but lucky for us Squadron Hobbies has kept this outstanding line of detail products alive. Squadron’s new owner, Brandon Lowe has announced that as he continues the line, all the original products designed by Loren will carry the original name: “Loren Perry’s Gold Medal Models”. He also plans to expand the line with products of his own design. However, those will not carry Loren Perry’s name on the label, but only “Gold Medal Models”.

Thanks to IPMS and Squadron Hobbies for his review sample and to Squadron for keeping this line of great products available for years to come.