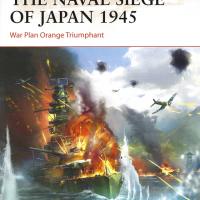 In the final months of the Pacific War, the U.S. Navy unleashed its full fury on the Home Islands of Japan. Beginning with airstrikes to cover the amphibious landings on Iwo Jima in February, 1945 until the day of the Japanese surrender on August 15, aircraft and naval vessels of the American navy (soon joined by the British Pacific Fleet) ranged up and down the length of the Japanese Islands attacking industrial targets, sweeping aside Japanese air power and, with particular relish, devastating the last remnants of the Imperial Japanese Navy.

Author Brian Herder brings into focus the final acts of the war, highlighting the range of destructive forces brought to bear on the Japanese. By the summer of 1945, those forces were many and varied. The primary naval weapon was Task Force 38, the fast carriers under Admiral William F. Halsey, and directly commanded by Vice Admiral John “Slew” McCain (grandfather of Captain, later Senator, John McCain). The Halsey/McCain team took over from Admiral Ray Spruance and Vice Admiral Marc Mitscher (leading then TF 58) in May, 1945 as part of the rotating command structure initiated my Pacific Fleet commander Admiral Nimitz earlier in the war. These two teams would be integrated for the coming invasion of Japan scheduled to begin in November. By July, TF 38 was augmented by carrier and surface forces of the British Pacific Fleet, designated TF 37. Herder makes note of the fact that Admiral Halsey, with Nimitz’s approval, determined that only U.S. forces would conduct strikes in the final elimination of the Japanese fleet, relegating PBF forces to other targets when those strikes were carried out. Along with airstrikes, surface forces - battleships, cruisers, destroyers and even a submarine - conducted shore bombardments with impunity on coastal targets as far north as Hokkaido Island.

Along with air strikes and shore bombardments, the author also details the highly successful mining campaign carried out by the Army Air Forces’s XXI Bomber Command. Initially looked upon as a distraction from its strategic bombing campaign, following a change in command, the Operation Strangle was enthusiastically embraced by incoming B-29 commander General Curtis LeMay. The Japanese were completely unprepared for the mining operation, and according to some Japanese naval officers, earlier application would have probably shortened the war. The author also notes the only wartime amphibious landing carried out against Japan, when sailors from the submarine USS Barb landed on southern Sakhalin Island and destroyed a rail line and freight train before returning to the submarine waiting a mere 600 yards off shore.

Several pages, with accompanying maps and tables, recount the projected invasion of Japan. Plans for Operation Olympic, the amphibious assault on the southern island of Kyushu scheduled for November 1, were nearly complete (plans for Operation Coronet, the assault of Honshu Island near Tokyo, were still being finalized). The assaulting ground, air and naval forces, as well as the operational plan and expected defenses are laid out in some detail. It’s interesting to note that upwards of 40 fast carriers and 25 battleships would be bombarding Japan by the end of 1945.

Like many volumes in the Osprey line, this one is a wealth of detailed information covering a broad subject. Interspersed with all the facts and figures are interesting details and personal highlights to make this a very readable account. However, I did note several discrepancies within the text, captions and illustrations (i.e, photo caption lists USS South Dakota, along with USS Wisconsin, as part of TF 53.8, where the accompanying table lists South Dakota and New Jersey as part of TF53.4; one of the two-page spread illustrations describes a dive bombing SB2C of Bunker Hill’s VB-84 but wearing markings from the USS Essex air group). These few details are but minor annoyances to what is an otherwise sterling account of the final months of the war against Japan, filling numerous gaps of information often left out of histories of the Pacific War.

Thanks to Osprey Publishing for providing this sample copy, and IPMS for the opportunity to provide this review.