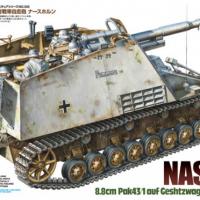 With the invasion of Russia in 1941 by German forces, and their encounter with hitherto unknown powerful tanks such as the T-34/76 and KV-1, the German forces clearly required a mobile anti tank weapon to help counter these Soviet tanks. In February 1942 the arms firm of Alkett came up with a tank destroyer design (Panzerjager) that utilized components of the Panzer III and Panzer IV tank, and mounting an 8.8cm long barreled anti tank gun, the Pak 43/1. This was basically the same gun that was later to be mounted in the Tiger II tank.

The prototype weapon was presented for inspection by Adolf Hitler in October 1942, and entered production at the start of 1943. It was initially known as the Hornisse (Hornet) but the name was changed to Nashorn (Rhinoceros) apparently at the behest of Hitler himself. The Hornisse/Nashorn did not provide its crew with much protection, just a simple walled in superstructure for protection against small arms fire. It turned out that this was adequate due to the long range killing power of the 8.8cm weapon, capable of effectively engaging and destroying any Allied armored vehicle deployed during WW2 at great distances. Just under 500 Nashorn’s were produced in the latter part of the war, most of them in 1943, though production continued at a slower pace through 1944 and into 1945.

The Nashorn was issued to the heavy anti tank battalions of the German Heer (schwere Panzerjäger-Abteilungen), a total of six of which were formed during WW2. Tamiya’s Nashorn comes with markings for vehicles from three of these AT battalions. The Nashorn appeared on the battlefields of the Eastern Front, Italy and in Western Europe, where it performed very well against Allied armored forces. Its debut was during the Battle of Kursk on the Eastern Front in July/August 1943.

Tamiya’s Nashorn kit is basically all new 2014 components, with the exception of the lower hull running gear such as the drive sprockets, idler wheels and road wheels. These come from earlier Panzer III and Panzer IV kits in the Tamiya range, but are nicely detailed. The one exception is the kit tracks, which appear a bit tired in my opinion, being rubber band type tracks from 20 years ago. (They also look to me to be on the malnourished side compared to the tracks that come in recent Dragon Model kits, or the aftermarket products such as Fruilmodel and Model Kasten). All the parts within this kit are without flash, or sink marks, but there are many ejector pin marks, not all of them hidden once the model is complete. Thus they need careful filling and sanding to remove them.

Construction of the kit starts as is normal for such models, with the lower hull running gear. As mentioned many of these components originate in kits produced by Tamiya within the past 20 years, but do not suffer any from this fact. The road wheels are three parts each, plus a vinyl poly cap sandwiched between the inner and outer road wheel. The poly cap allows the modeler to assemble the wheels, then slip them on and off for ease of painting them and also the lower hull. (The main lower hull tub part interestingly has a mysterious separate underside access plate, part C20. Is Tamiya still making motorized models??) The rear hull plate, part C14, has very nicely rendered weld marks, but in the same series of construction sequences we have tow hook parts C19 and C18, both of which have nasty, visible ejector pin marks.

In assembly section 9, we attach the two fenders to the main hull. There is absolutely zero detail on the underside of these fender parts, C17/27, whereas on similar fenders over the past decade on the competitor’s product, the underside of the fenders are extremely well detailed. Tamiya’s motto must be “out of sight, out of mind”, and it must be admitted that you will be hard pressed to see such detail unless you use a dental mirror. It is, nonetheless, an interesting design philosophy between Tamiya and its competitors.

As the modeler works their way through the construction of the Nashorn’s crew compartment, Sections 11 through 20, you are struck once again by the fact that parts that will be clearly visible when construction is finished, have unsightly ejector pin marks. For whatever reason Tamiya refuses to utilize mold designs that allow for the elimination of such marks. Thankfully these ejector pin marks aren’t in areas festooned with raised detail so that while they are an annoying pain to fill with putty and sand out, they don’t end up destroying the lovely detail that Tamiya has incorporated into this model kit.

Construction Sections 26 through 41 cover the assembly of the 8.8cm main gun and its surrounding superstructure. The detail on all the parts is excellent, and the fit one part to another is very precise as you would expect from the master of model engineering. The barrel is a very impressive one piece main unit, with a three part muzzle brake. Care of course will need to be taken to insure that the mold lines on this lengthy part are very carefully removed to avoid any “flat spots” on the barrel. In Section 27, the barrel assembly sequences, make sure that you get Part D32 the right way around. Tamiya gives the gun the ability to be raised and lowered, so Section 32 sees the need for superglue for the installation of two metal shafts. Despite the complexity of the gun assembly, with care and attention to detail, everything fits together extremely well.

When you come to Section 40, and the mounting of the gun and its superstructure to the main hull assembly, take your time, test fit, and test fit some more, and then go for it. My gun assembly appears to sit just a tad tall. I could have used clamps to apply pressure to the unit to try and seat it better, but I felt this might lead to disaster, and damage to all my pain staking work on the gun assembly. I feel my mounting is “close enough”, but be warned this is a tricky part of the kit’s assembly.

Tamiya provides the modeler with the ability to show the two ammunition storage lockers in the rear of the crew compartment either open, or closed. If open, there are some nicely rendered shells to display in the storage lockers. I chose to have one shown open, the other closed. For the brass color I used Alclad II “Pale Gold”, which to me makes for a nice brass shell casing!

Section 43 sees the crew access doors at the rear of the fighting compartment installed, and once again, large raised ejection pin marks are present, 4 per door part. Being raised they are less work to remove than had they been indented, but still, come on Tamiya, I think you can try a little harder!

In Section 47 I replaced the length of string Tamiya would have you utilize for the tow cable with a length of aftermarket twisted copper cable from Eureka of Poland, which made for a MUCH more convincing part. Sadly, I lost Part E18, the tow cable securing latch, to the carpet monster. I will need to scratch build a replacement part at a future date.

Tamiya includes a set of 4 figures in this kit, providing a crew for the vehicle: a commander with field glasses held to his eyes, a gunner, and two loaders. They are dressed in winter cold gear, and will fill out the fighting compartment nicely. Detail appears acceptable, though I would probably replace the heads with resin ones from the likes of Hornet for slightly better detail.

When it comes to painting this kit, Tamiya provides the modeler with a separate large fold out sheet covering the three marking schemes in color, as well as a color figure painting layout, and 14 small photos of a Nashorn from the Kubinka Museum in Russia. There is also a nice potted history of the Nashorn. I chose to do my model as a version of “Red Heart” from the 3rd Company, 88th Heavy Anti-Tank Battalion, “Eastern Front 1944”. I utilized Tamiya acrylic lacquer paints, thinned with Mr Color Self Leveling lacquer thinner, my favorite combination. Tamiya’s decals worked just fine: once the color coats were applied and then allowed to thoroughly dry I airbrushed the entire model with Tamiya X-22 Clear Gloss. The decals were laid down over a thin puddle of Mr Decal Soft, followed by Mr Decal Set, carefully wicking up the excess each time with a small piece of paper towel. Allowed to dry for 24 hours, a few thin layers of Tamiya X-22 Clear Gloss were then applied over the decals to seal them. After a couple of days’ drying time, I applied a few washes of thinned oil paints such as Burnt Umber to pick out the excellent raised details Tamiya provides. After looking over the kit supplied rubber band tracks, I decided that since the kit was going to grace my model shelves for (hopefully) a good few decades, I wanted something more to my liking. So I must confess that what you see on my review model are Fruilmodel tracks, not Tamiya’s. They have been treated via BlackenIt solution and some MIG rust pigments.

What then of Tamiya’s new Nashorn kit? Well, despite my complaints about the ejector pin marks that are scattered about the kit parts, everything else about the plastic parts is first rate: fidelity of detail, ease of assembly, fit of the various subcomponents: Tamiya at their best in other words. I just wish Tamiya had payed a little more attention to the kit tracks. Tamiya has shown that they can produce excellent injection molded link and length tracks for their models, such as on their Hetzer, BT-7 and JS-2 vehicles in 1/35th scale. This said, the kit tracks are nicely glue-able with standard model cement, and for many would be perfectly acceptable. I felt that the model I ended up with looks excellent and the overall building experience was extremely good with this kit. With far fewer parts than some of their Chinese competitors, Tamiya has delivered a very worthy kit to the modeling public.

My thanks to TamiyaUSA for providing IPMS USA the chance to review this kit.