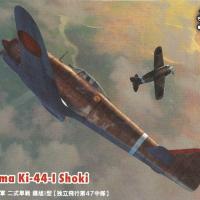 The Nakajima Ki-44 “Shoki”, code named “Tojo” by Allied intelligence during World War II, was rather unusual by Japanese standards, since it violated the traditional Japanese design emphasis on maneuverability at the expense of nearly every other performance attribute. Appearing shortly after the Ki-43 “Oscar”, the Ki-44 stressed speed, heavier armament, and rate of climb over other factors, and was intended as a high speed interceptor. The first flight was in 1940, and by 1941 several prototypes had been tested, these eventually being sent to China and later Southeast Asia for combat evaluation. Initial response by Japanese Army pilots was negative, but after they became familiar with the type, they achieved some successes, resulting in further production of the type. Production models were equipped with more powerful engines, and the type entered service as the Type 2 Single Seat Fighter, Model 2, or Ki-44-II Otsu, with four 12.7 mm machine guns. The type served in the Philippines, Formosa, China, and in mainland Japan against the B-29 offensive, although except for a few successful suicidal ramming attacks, the type slowly faded from the scene, being replaced by a newer type, the Nakajima Ki-84 “Frank”, which was superior on all counts. Only 1,225 Ki-44’s were built before production ended in 1944.

There have been a few other 1/72 scale kits issued of this aircraft, but the most commonly available one is Hasegawa’s kit from many years ago. It is still competitive, and except for the cockpit detail, in my opinion it’s equal to this kit at a much cheaper price.

Aside from the kit instructions which provide a short description of the career of the Ki-44, there are numerous sources of information on the type. A Profile was published many years ago, and Koku Fan provides many excellent photos of the type, although the text is in Japanese. Francillon’s Japanese Aircraft of the Pacific War gives a good account of the type’s career, while the Thorp Japanese Army Air Force Camouflage and Markings, World War II also provides useful information. Other more recently published texts on Japanese Army aviation also have color and marking information on the aircraft, so there should be no shortage of information in the marketplace.

The instructions, consisting of 10 pages, provide a history, sprue diagram, cursory color guide, 5 pages of assembly drawings, and 4 pages of color schemes for 4 different aircraft. The assembly drawings are especially useful, although there is no text in English or any other language. The kit provides parts for two variants, the Ki-44 prototypes and the Ki-44-1 late production model. A separate wing lower section is provided for the production model, and a few parts are specific to each different model, so be sure to pay attention to the drawings when assembling your particular variant. The interior and external color information is generally good, except for one major factor. The instructions state to paint the upper surfaces of the prototype aircraft “green”, while the interior is to be painted “Nakajima Cockpit Green”. This information is somewhat vague, especially since several sources I have depict the aircraft in a somewhat weathered medium brown color topsides, similar to that used by some Ki-43’s in Southeast Asia. After quite a bit of searching, I decided to use the brown color, as this is the color shown in the Profile and in some Japanese sources. Note that the profile drawings on the back of the box show the airplane in a brown finish, not green. The decals were quite well done, and these were no problem, except for one tail stripe which broke off at the top of the fin and had to be replaced and touched up.

The kit consists of 58 styrene pieces, 4 clear plastic parts, and a resin engine and pilot’s seat. Panel lines are recessed, and the cockpit interior is quite detailed, consisting of a seat, floor, instrument panel, control stick, rudder pedals, headrest, machine gun breeches, and a gunsight. Sidewall detail is provided on both sides, and the canopy can be left open if desired. The engine is quite well detailed, and the exhaust stacks are separate. External fuel tanks are provided, and a nicely detailed landing gear is included, with gear door differences for each variant. In the box, the kit looks very nice, and most of the in-box reviews I’ve read give the kit rave reviews. There was quite a bit of subtle flash on the parts which requires smoothing out, but nothing an experienced modeler can’t handle.

The basic assembly of the kit is another story. The wings fit together quite well; however, the trailing edges with the flap guides seem a little odd, and actually the upper surfaces don’t exactly mate with the under surfaces at the trailing edge. This shows in panel lines on several drawings I have, but I can’t find a photo that confirms this. I left it as it was, as it was probably correct. One of the flap guides had broken off, but the spare wing lower section provided a replacement, so this was not a problem. The fuselage fit was marginal and required a bit of filler. The engine is intended to be fitted into the nose section with the forward cowling to go on afterwards, but the engine required some serious filing if the fuselage halves were to fit together properly. Even then, the forward cowling did not fit properly, requiring a lot of filler to get it to look right. The wing assembly fit to the fuselage was notoriously bad, as the wing thickness was much less than the fairing on the fuselage, necessitating a lot of filler to get it to look right. The elevator/stabilizers butt-fit into the tail unit, and even these needed some filler. The tailwheel attaches to the inside of the rear fuselage, and appears a little long until the gear doors are installed. Then it looks acceptable.

There is an oil cooler which the production model has, but the prototypes lacked. A very small part (#58), identified on the sprue diagram but not on the instructions, goes between the wheel wells. Somehow, this part was omitted in my kit. I think it was a small oil cooler. The drawings are also confusing on the differences between the landing gear covers on the prototype and the production model, as they are shown on the assembly drawings but not the three-view color guides. The location of the radio mast is not really specified, and there is no indication in the box art or plans as to the antenna’s configuration. The Profile book showed it, so the problem was solved that way. Usually, box art drawings show antennas and rigging, but this box art didn’t.

Once all of the filling was done, the model could be painted. I left the canopy off until last, and found that the little hole where the gunsight was supposed to go through was too high. Fortunately, there was another windshield without the hole provided, so I used that. This is a small model, so painting was easy. Decals were basically very well done, with the right shade of red for the Hinomarus, and they didn’t require any setting solution. Once painted and set up, the model looks pretty good.

Thanks to Squadron for providing the review kit, and IPMS-USA for the review opportunity.