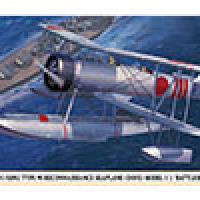 The Nakajima E8N was a Japanese ship-borne, catapult-launched reconnaissance seaplane aircraft of the Second Sino-Japanese War. It was a single-engine, two-seat biplane with a central main-float and underwing outriggers. During the Pacific war it was known to the Allies by the reporting name "Dave".

Ordered into production and designated Navy Type 95 Reconnaissance Seaplane Model 1 in October 1935. A total of 755 E8Ns were built by Nakajima and Kawanishi, production continuing until 1940. It was subsequently shipped aboard all the capital ships then in service, 16 cruisers and five seaplane tenders.

It was used successfully in the Second Sino-Japanese War not only for reconnaissance, but also for dive-bombing and artillery spotting.

One E8N was purchased in early 1941 by the German Naval Attache to Japan, Vice-Admiral Wenneker, and dispatched on board KM MUNSTERLAND to rendezvous with the German auxiliary cruiser Orion at Maug Island in the Marianas. The meeting occurred on 1 FEB 1941, and Orion thus became the only German naval vessel of the Second World War to employ a Japanese float plane.

Some aircraft remained in service with the fleet at the outbreak of the Pacific War, and one flew reconnaissance from the battleship Haruna during the Battle of Midway. They were soon replaced by more modern aircraft such as the Aichi E13A and the Mitsubishi F1M, and reassigned to second-line duties.

Yamato was the biggest battleship ever created. She carried seven aircraft like the E8N intended for reconnaissance and spotting the fall of her 18.1 inch shells. In the Second Sino-Japanese War, these aircraft extended the effective radius of action of large capital ships by keeping them apprised of any enemies in the area. By the time of the Pacific War, however, these biplanes were largely obsolete and were replaced by newer types after the critical Battle of Midway. This limited edition kit features the option to build as either a model 1 or 2 version, with decals for each.

Aside from Wikipedia, I also reviewed Google images and found a few grainy black and white images of the aircraft. I have a copy of "Japanese Aircraft of the Pacific War" by Rene' Francillon, that includes three pages with two also grainy images plus a three-view line drawing.

First, the box art is stunning and worthy of framing if you are so inclined. There are eight grey plastic sprues packaged in one sealed bag, and one clear parts sprue plus a sprue with nylon sleeves. Examination of the parts showed fine detail on the exterior surfaces. The metal and fabric portions were easily identifiable.

The instructions come in a ten page fold-out with the sprues identified, 12 steps of construction, and three profiles. Each construction step will indicate paint colors and decal placement when appropriate.

The construction includes two five-part crew members. Although I normally do not add crew in my builds I did note the fine details of the figures. If you are so inclined to include these little guys in your build with some careful painting they should really dress up the open cockpit .

I removed the cockpit components from the sprues and stuck them to an old piece of foam board for painting. Once dry I glued the parts together to form the cockpit subassembly. The parts go together without issue. I placed this sub assembly inside the right fuselage half using the internal locator tabs and glued the cockpit tub in place. When I fitted the left side to the right side I was pleased with the superb fit. Once the join had cured I mounted the two seats in place, and fitted the top part of the fuselage in place. I did find a bit of a gap between the fuselage side and top. I applied a bit of Mr. Surfacer 500 along the gap, and when dry smoothed the filler with a Q-tip wetted with alcohol. The horizontal stabilizers and rudder were glued in place. Dave is a tiny boy for sure!

The engine is a two part affair, and some care is required to align both faces before the solvent is applied. The two exhaust manifolds are separate and may be installed after the engine is painted. The instructions show the three-part cowling being assembled around the completed engine. I was not fond of that idea as I saw the cowl painting to be a challenge if the instructions were followed to the letter. I preferred to assemble the cowling and paint the interior and exterior before placing the engine inside. I fixed the three part cowling parts together, but left one joint dry. I taped the dry joint closed and tried to fit the engine in place. It would not fit. I noted small raised pegs on the tops of each cylinder head, and saw matching depression on the inside of the cowling. I cut the pegs off and the engine fit into the cowling, however it was a tight fit. The engine/cowling assembly would be mounted in place after the cowling and model were painted.

The wings were next. If bombs are to be added to the build two small holes per side on the bottom wings must be drilled out before the top half is glued in place. Each bottom wing is made up from three parts and once assembled may be fitted to the fuselage. The lower wings fit into recesses on each side of the lower fuselage. Although these are positive fits it does not hurt to check the alignment of the wings. The top wing is made up with a top and bottom half and two small rectangular inserts in the top center section, plus an optional two-part wind driven generator. The generator is used only if building the Type 95 Model 1. The leading edges of both the top and lower wings must be carefully sanded to eliminate the join and to avoid damaging the wrap-around raised ribbing.

There are six struts that attach the top wing to the fuselage and lower wings. I fitted the struts in place and glued them to the lower wing and fuselage only, leaving a dry fit for the top wing. I planned to paint the model and mount the top wing in place after the painting was completed.

The three floats came next. The center float is made up with a top and bottom, plus four braces. I glued the braces to the float and dry fit them in place in the lower fuselage to allow the solvent to set up with the braces in the proper angle. The wing floats are made from two halves with integral braces plus two separate braces. The braces, parts B3, B4, B12 and B13, must be carefully removed from the sprue and the attachment point sprue must be attended to. Here again I glued the separate braces to the floats and dry fitted them to the wings until the solvent set up good and proper. I planned to paint the float separate from the wings: this was done to facilitate the painting and weathering.

Here Comes the Trolley and Trestle!!

The last step was the construction of the trolley and trestle. Some of the parts have noticeable mold lines that should be removed before assembly and painting.

All three versions are shown as "silver" in the instructions which I took to mean shades of aluminum. The cowling was painted black, while the metal surfaces of the wings and fuselage were painted with ModelMaster Aluminum, and the fabric surfaces with Alclad Dull Aluminum.

I left the floats, wings, and miscellaneous struts loose for painting to avoid any challenges that would have required masking. I did remember to remove the paint from the mounting tabs to permit a proper glued join.

I thought that dolly would have been made from steel sections. The plastic was first painted steel, the a double coat of hair spray was applied, followed by flat black paint. A wet brush was used to remove the paint from various edges of the trolley.

I used the kit marking for the number two aircraft stationed with the battleship Yamoto, January 1942. The first decals were applied to the center float before it was fitted to the fuselage. The red patch on the top of the float bridged the longitudinal ribs, and with the application of MicroSol eventually split apart. I removed the fractured decal, masked the spot, and painted it red.

I used a panel line wash to accent the various panels, and finished the weathering with white oil paint on the floats to simulate salt spray. The weathering and decals were sealed with ModelMaster Acryl flat.

The dolly was glued to the main float using an acrylic glue, while the trestle was pinned and glued to the rear end of the float.

Oh boy!! The instructions do not include a rigging diagram, but rigging is shown in the box art. Before painting I pre-drilled small holes where ever the rigging was to be attached. This worked well as I had left the top wing and floats off until painting was completed.

This is a very nice kit, with fine, crisp molded detail. Hasegawa should be congratulated on their choice of subjects. I have built the Fairey Swordfish floatplane, and it is a "giant" compared to the E8N2 Dave. The kit went together without any significant issues, but the painting will take some planning before the floats and top wings are fixed to the fuselage. If you are interested in Japanese Pacific War aircraft I recommend this kit for your collection. It is not a big aircraft, but it is interesting, and will make a stunning addition to the model display shelf.

I wish to thank Hobbico-Hasegawa and IPMS/USA for the opportunity to review and build this kit.