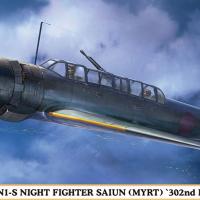 Hasegawa has released this aircraft with components to make two Prototypes of the original developed reconnaissance aircraft modified for night fighter duty. One version with twin 20mm cannons and one with a single 30mm Cannon. There was only one of each built in June 1945 and both were used. There was no record of these being successful in service.

While you get lots of sprues, you also get plenty of unused parts.

All the sprues are extremely well molded with very little flash and great detail; the decals allow you to finish the aircraft as the two variants different versions.

First is the construction of the cockpit which is well detailed although the addition of Seat belts either molded in or as parts would have been a great addition. The instructions call for a paint mix to achieve the interior color, I did not use this but instead used Tamiya XF71 which is very close to the color.

I choose to build the version with the single 30mm cannon as you need to decide this while building the cockpit.

The location of the 30mm gun and mounting parts is not very clear and takes putting the fuselage parts together in a dry build a couple of times to ensure it installs. The instrumentation decals need a lot of decal solution to get them to conform to the raised gauges in the parts.

The next stage is assembling the fuselage, cockpit, and wings. I did have some fit issues between the wings and fuselage and this needed filling and sanding.

The instructions have you cut the molded in navigation lights out and replacing them with provided clear parts. I actually used Kristal Klear as the parts seemed a little large for the locations.

Next is the engine and cowling build up this was very easy and simple and looks great when built.

The painting and decals were simple and easy to install.

This is an excellent kit from Hasegawa; I really enjoyed this build and subject.

Thanks go to Hobbico/Hasegawa for providing this kit to review and IPMS USA for allowing me to review it for them.

Finished model of Myrt
Previous Next