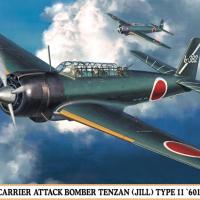 The Nakajima B6N1 Type 11 attack/torpedo bomber Tenzan, Allied code name “Jill”, was introduced in 1943 as a replacement for the B5N Kate. It was a big improvement over the Kate and, although faster and more maneuverable, it was still no match for the U.S. Navy’s carrier-based fighters. The losses were so great that only one Jill is known to be in existence today.

There were two main production variants of the Jill – the earlier Type 11 and the later Type 12. The Type 11 had the more powerful Mamori Model 11 power plant, a 14-cylinder radial (rated 1870 hp at takeoff), but it proved to be unreliable. The Mamori engine was dropped in favor of the more dependable but considerably weaker Kasei powerplant in the Tenzan Type 12 design.

My sample arrived in the standard colorful Hasegawa box. Inside, I found 170 pieces; all were sealed in their typical clear poly-bags. The plastic is from Hasegawa’s older B6N1 Type 12 and isn’t a new tooling release. However, it has held up very well over the years. I could only find a few annoying ejector pin marks (along with a few sink marks) flawing an otherwise near-perfect mold. The clear parts are thin and feature fine framing details but, sadly, they are a bit opaque. This limited edition boxing included resin pieces to backdate the kit from a Type 12 to a Type 11. The resin items include larger correct prop blades, a spinner, an oil cooler scoop, exhaust pipes, an engine cowling, and windscreen forward fuselage halves. The resin parts are meant to be a drop-in replacement for their plastic counterparts.

My sample had a few problems with the resin being short-shot, or not fully cast. Air bubbles were also problematic. I probably could have fixed these shortcomings, but after contacting the proper chain of command, it was decided to have new parts sent to me. To the untrained eye, I’m sure the replacements appeared to be Ok, but, sadly, they were not. I’ll go into more detail on this later.

Also inside the box were the standard fold-out instruction sheet and a beautiful comprehensive decal sheet.

I began this build as I do with almost all model aircraft, in the cockpit and crew stations. I found the level of detail to be above average and the parts very simple to construct. The instrument panel is represented with nice raised detail and can be complemented with a choice of two decals, depending on your modeling methodology. There’s a trap door option that allows you to drop the 7.7 mm machine gun from the belly. In hindsight, I would have done this but my concern (at this stage of the build) was that clearance would have been a problem.

I deviated from the instructions (luckily) and didn’t glue the resin parts to the main fuselage before gluing the fuselage halves. Instead, I closed up the fuselage and added the inboard wing section; it all went together without any problems. That was to be short-lived, however, as I began working with the resin parts. Now, to be fair, I’m sure the master copies were made to the highest standards, but perhaps someone needs to perform a quality control check of the production castings. As I mentioned earlier, the first samples were not satisfactory, and the second set wasn’t much better. To elaborate, the prop tips were missing on a few blades due to air bubbles, and some blades were warped. Air bubbles also plagued the very thin cowling flaps. The forward fuselage halves were all short-shot and misshapen, and did not test-fit very well to the plastic fuselage. When mating to the completed main fuselage, the resin halves have to be fitted, filled, reshaped, and rescribed. This part of the build will test your patience and modeling skills to the limit. Most of the other resin parts also needed some reworking to make them presentable. Once that was over, the rest of the build seemed to proceed without a hitch…until I tried to attach the wings in the open configuration. For what it’s worth, glue the inboard and outboard wing parts first if you plan on leaving them unfolded. As a result of my shortsightedness, I was forced to fold the wings. One last note: the decals are awesome.

Priced at 75 bucks, it’s a tough call. I love Hasegawa model kits – they have an honest familiarity about them. However, when adding poorly cast resin parts into the mix, you could find yourself walking into Terra incognito.

Thanks to Hobbico and Hasegawa for the kit and IPMS-USA for the review opportunity.

Resin set included in the kit