The Munsters House at 1313 Mockingbird Lane 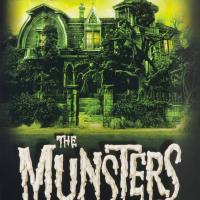 I remember when The Munsters were first introduced to us. Just your typical all-American family, who came from Transylvania, and who also just happened to be Frankenstein and The Bride of Frankenstein! The rest of the family had Count Dracula as the slightly off-kilter Grandpa; a prepubescent wolf boy named Eddie who slept in a cupboard; and one out-of-place niece, the beautiful Marilyn. The house they lived in was an amazing place of dungeons, secret passages, and cob webs galore. The architecture was mostly Gothic, with hints of Victorian included, and a little Haunted House thrown in for good measure!

The TV house, which is really only a steel-framed front, was originally built for the movie So Goes My Love in 1946 by Universal Studios. It had been moved a few times from its original site, and appeared in the movies The Brass Bottle, The Burbs, and Dragnet. It also was in a few episodes of Leave it to Beaver before its most famous residents moved in. Lately, it’s been used in the TV show Desperate Housewives with a few new modifications so as to not look so Munster-ish. As far as I know, it still exists today.

The 1/87 (HO) scale kit is molded in light tan plastic, and has approximately 70 plastic parts. A sheet of pre-printed window inserts and an instruction sheet completes the contents of the box. The kit parts are all molded very well, and have a good level of detail present. I looked on the web for further information on the house and found reasonable amounts of the detail on the original prop house to be present in the kit. While there is no actual structure to make a back on the prop house, the kit does contain a rear structure. The appearance in the entire structure is consistent throughout.

I followed the assembly sequence as called for in the instructions. I painted the parts before assembly (more on that in a moment). The instructions recommend using the foundation base as a jig when putting together the various subassemblies that make up the body of the house. It ensures everything goes together square. I found that to be excellent advice, and I would encourage you to do so as well. I placed the walls on the base dry, and when I had a good fit I applied liquid cement to the seams. When a subassembly was completely formed, I allowed the cement to dry, then removed it from the base to fill the seams completely and fortify the joint. I left the roof sections off until the end of the project – that made it easier to install the window inserts after painting. The most difficult part of assembly came at the very end when I attached the Mansard roof sections. The alignment of the very last roof section proved nearly impossible to position correctly on all four sides. I compromised and got it to align reasonably close, then used white clue to fill the resulting seam. Other than that one difficulty, the rest of the kit was easy to assemble.

I spent the most time painting and finishing the kit. I primed all the parts with Model Master Flat White enamel thinned it with lacquer thinner to add some bite, and airbrushed a solid coat to both sides of all the parts. When this coat dried completely, I painted all the interior surfaces flat black. The instructions lead the builder toward two distinct finishing options. The first one contains a color palate that will produce a house that could be on Any Street in Anytown, USA. If you were going to use this as part of an HO train or car layout, this would be an excellent starting point for a paint scheme.

I chose the second option. Because the show was shot in black and white, we never knew exactly what color the house was. When the house exteriors were shown, all we saw were a series of grays. The instructions point this out, and say any combinations of grays would work. I took this as a challenge and wound up using eight different shades and hues of gray. Some were straight of the bottle, while others were custom-mixed to accent and highlight the surrounding colors. I used acrylic paints from Model Master, Vallejo, and Liquitex intermixed to create the shades used. It should be noted here that the accompanying photographs were shot in full color. The gray scheme and white background give the impression of Black and White pictures...just like the TV show!

I brush-painted two finish coats of each color on all exterior surfaces. I started with the light gray on the trim – I wanted the trim to be the lightest color on the house, and worked progressively darker as I went. The body of the house was painted a medium gray. I wound up painting the roof panels Euro gray, with a few other shades in between on the masonry, balcony, and the many decorative architectural details. I knew there would be touch-ups required later on, so I kept a list of what color went where and the formula for each. I wasn’t worried about slight color variation because I planned to work any differences into the weathering later.

Painting the sub-assemblies proved to be a good choice. After everything was painted and dry, I applied a wet wash of a mix of Paines Gray, Lamp Black, and Burnt Umber oil paints in a mineral spirits base. The color ratio was altered for each color it was applied to. I turned everything upside down to get a nice ark edge under the clapboard siding, windows, and doors. I dry-brushed some light versions of the oils.

I installed the window inserts after the painting was complete, before final assembly. Putting all the completed sub-assemblies on the foundation went very quickly. As I mentioned earlier, I had a little difficulty in getting the final roof sections to line up correctly. I realized too late that the two end wing roofs should be assembled, and then add the center sections. I built from left to right, which may not have been the best way to get everything aligned correctly. I installed the front sections and filled the gaps in the rear section. I filled and blended the resulting gaps, and repainted the repairs. It doesn’t look all that bad, and doesn’t detract from the overall look of the model.

The completed model is close to the photos I found on line of the original structure. There have been countless modifications made over the years, depending on the need for the story, and in terms of fidelity to the original prototype I would give the model good marks. It looks like the Munsters’ house! I like the effect the window inserts give the completed model. The illusion of old ragged curtains looks cool, and if lit from behind would look even better. I’m sure someone makes a lighting kit for it, and if not it wouldn’t be that hard to make it light up yourself.

The construction wasn’t difficult. And with all the options for painting, and the HO scale, it will fit right in to a railroad or automotive track set-up with ease. I enjoyed building this kit and may put it on a base with some landscaping sometime in the future. All overgrown, of course! I would recommend this kit to all modelers and especially fans of the show.

Thank you to Moebius Models and IPMS/USA for providing the opportunity to review this model.

House front from above

House side and rear