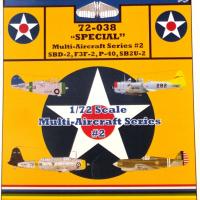 I had a love-hate relationship with this set of decals. This is my first experience using decals from Yellow-Wings, and also from the new Microscale printing process. The colors are excellent and in perfect register, the film around the edges is minimal, they are exceptionally thin and they cover aircraft from my favorite era. However, the thinness lead to issues with the long and thin decals. Additionally, the smallest decals required a perfectly smooth service to be moved about easily, an important issue on a small model like a 1/72 F3F-2. I ended up purchasing a second set of decals to fix several issues; severely torn decals and a set of wing chevrons that were not sufficiently opaque.

This 1/72 multi-aircraft decal set is the second from Yellow-Wings Decals. You get four complete sets of decals on one sheet of decal paper for the following aircraft:

As stated above, the decals have correct colors, based on my references listed below; they are extremely thin and in perfect register. The colors, with a couple exceptions, are sufficiently dense. Yellow-Wings included six pages of instructions, front and back on three 8-1/2” x11” sheets of paper. The first four pages cover decal placement, with recommended order of placement and paint color suggestions. Recommended paints are from Tamiya, Testors or Polly Scale. A couple of colors have multiple choices of manufacturer. Most recommendations are for spray cans, while a few are for bottles. I made several paint substitutions based on my paint stocks. Despite the appearance in the pictures of the P-40B, the film is not visible with the eye from directly above. There is absolutely no shine.

Because of my problems with applying the decals, I purchased a second set.

The instructions recommend “any” kit of the four types represented. I used the following kits:

The P-40 is the only kit requiring a flat finish. To prepare the flat paint to receive the decals I used two hand-brushed coats of Future floor polish. As it turned out, this was not sufficiently glossy. My model does not have the twin white command stripes n the rear fuselage as provided with the decals.. They tore while removing from the backing paper (see lessons-learned below). I also failed to follow the instructions and tried to apply the second half without letting the first half completely set. One of the tail markings adhered to the tail before I could get it correctly positioned. This may have been my fault as I discuss in my lessons-learned below. Yellow-Wings provide six of the small numeral “100” decals for the nose. I thought they might be spares, but now I believe they are to be layered to make the numbers opaque. I applied a coat of clear flat lacquer over the decals. The decals were unaffected by the lacquer.

These decals went on easily with one exception. The wing walks broke into several large segments while either removing from the backing paper or while moving around on the model. After having to replace the right wing walk, I cut the left one into two parts before applying. This simplified the application while reducing my blood pressure. The lemon yellow wing chevrons cross the black wing walks, but are not opaque enough, allowing the wing walks to bleed through. I applied a section set of chevrons which solved the issue. Please refer to the attached before and after photos.

This option is an interesting choice for two reasons. The SBD-1 was the only model of SBD to actually reach squadron service with “yellow wings”. According to Yellow-Wing’s documentation, there were several SBD-2s that came off the assembly line painted with the peace-time markings just as the Navy was issuing new camouflage directives. The SBD-2 in the decal selection is one of these aircraft sitting outside the Douglas plant. I appreciate Yellow-Wings providing markings for an aircraft other than one belonging to a section leader. The only problem I had with this model was the placement of the tail codes. I hand painted the tail surfaces and they were not as smooth as they needed to be.

I had the fewest issues with this set, as it was the last model I decaled. The wing chevron tore at the front edge of the wing while being moved into position. The damage was easily repaired by either reconnection or with a spot of paint. See the attached photo reflecting the repaired chevron.

I understand that these lessons may be common sense for those readers that build a lot of airplane kits. I tend to build more armor, which require few to no decals, or I tend to build older aircraft kits that come with those ‘indestructible’ decals. Yellow-Wings recommend the Micro Scale decal solutions and I concur. The decals drew down into the surface detail with just Micro Set. I used Micro Sol to get the P-40 tail stripes to wrap around the training edge. I did not try any other solutions.

I used the paint samples at the end of the following references to ensure accuracy of my paints selections.

I also used Color Schemes and Markings, U.S. Navy Aircraft, 1911-1950, by Bill C. Kilgrain. This book has a complete listing of aircraft types by squadron, by year. I used it to verify squadron assignments.

Despite the problems I encountered during application, which were mostly my fault, I highly recommend these decals. I own a large selection of 1/48 Yellow-Wings decals. If you want to build multiple models of the same aircraft or just something different than what is in the kits, then choices are few. Yellow-Wings decals for the inter-war period for three major scales, 1/72, 1/48, and 1/32.

I would like to thank Yellow-Wings Decals for this review kit.