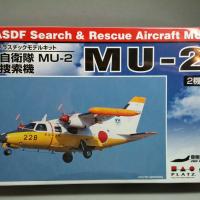 Platz, out of Japan, has been involved in the 1/144th modeling community for a while. They have produced many of their own kits and have teamed up with another Japanese company called F-Toys. F-Toys produce various subjects, among them being 1/144th scale aircraft kits. These kits from F-Toys are typically pre-painted, mostly assembled, and somewhat snap together. Many 1/144th scale modelers will take these pre-painted F-Toys kits strip them down, add details, repaint, and decal them. However, now we are seeing Platz take those same F-Toys kits and produce them as traditional model kits. This Mitsubishi MU-2 is a prime example of that venture; first, it was released under the F-Toys name as a pre-painted kit, and now it’s released as a traditional model kit.

The Platz MU-2 comes two kits in a box. The parts are molded in a nice grey styrene with very nice recessed panel lines. There are 27 grey parts and seven clear parts. Also included are two parts to make a stand should use wish to model your T-34 in-flight. The wings are molded as single pieces. A cockpit is included that consists of two seats. There is no cabin detail, but you won’t see anything in there anyways. The canopy is nice and clear; however, it suffers from two large locator pins on the inside rear of the canopy. This is a carryover from this kit being released as a mostly built F-Toys kit. The kit comes with parts to build the JASDF MU-2S with the radar in the nose and observation blisters on the rear windows; a JGSDF LR-1, which requires you to cut the wingtip tanks off; and lastly is a civilian MU-2B. Decals are included for four marking options.

I chose to build the civilian MU-2B first. I had this kit together and ready for paint in a few evenings at the bench. It was a relaxing build. There are two areas that you’ll need to pay attention to. First, if you do not want to model your MU-2 in flight, you’ll need to fill in the gap under the fuselage where the support stand goes. Second, you need to decide which variant you want to build. The LR-1 requires some surgery to the wingtip tanks, but that looks relatively easy. I also drilled out the exhaust portion of the engines. Not only did this provide for a more realistic look, but it also gave me a place to stick a toothpick to hold the model during painting.

I added seat harnesses made from masking tape to my seats. The clear parts are nice and clear but even so, you cannot see much inside the cockpit and cabin. I chose to model my MU-2B on the ground, and there’s just enough room to add some weight so it’s not a tail-sitter. A little filler was required along the top of the wing-fuselage join, but nothing outside of the norm.

The final touches were applying the landing gear. This was an easy task, but the kit does leave out the nose gear side doors. You’ll want to fashion some from thin plastic sheet. If you build the military versions, don’t forget to add the long aerials on top of the fuselage and the antenna on the bottom, which is not included in the kit.

These new Platz kits are great. The level of detail and fit make for some enjoyable “weekend” builds. The decals perform exceptionally well, with the exception of the cheat line decals. Overall, this was a fun build and looks really nice on the shelf. I can definitely recommend it. Thanks to Dragon USA and Platz for providing the kit and for IPMS/USA for allowing me to review it.