MQ-9 "Return of the Reaper" 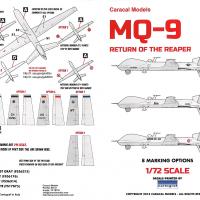 This is the second sheet printed by Caracal covering the operators of the MQ-9 Reaper UAV. The sheet includes markings for four U.S. Air Force Reapers, and one each from the RAF, the French Air Force, the Italian Air Force, and a civilian version operated by NASA. I liked the French Air Force markings, but as their Reapers are unarmed, and I wanted to load up mine, I opted instead for the RAF Reaper.

While the Reaper is a relatively large UAV, there are not a lot of decals to be applied, regardless of which one you choose to model. The set includes enough of the stencils to decal two Reapers from the sheet, which is good as the Skunkworks kit is a double kit.

The decal sheet includes instructions on the colors to paint the Reaper, and to my surprise, unlike the MQ-1 Predator, the military Reapers are two shades of grey, with the underside painted in a much darker grey than the topside. The sensor turret is a third shade of grey somewhere in between the other two.

The instructions are very clear on what markings apply to which Reaper, and point out that the USAF, RAF and Italian Air Force versions only have national markings on the top left and bottom right wings, whereas the French version has them on the top and bottom of both wings. The set includes 4 roundels for the RAF version, but only two are needed, so there are two spare roundels. No markings are included for the Hellfires or LGB included with the Skunkworks kit, so I will be using the kit decals for the weapons.

I applied the decals with MicroSet and MicroSol and they settled down extremely well without any air bubbles or silvering. When I sprayed the model with clear flat, the decals blended right in with no visible edges as shown on the photos.

Highly recommended for those who want a little variety in their UAV options.

Thank you to Caracal for the sample and to IPMS-USA for letting me review it.