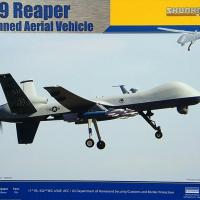 General Atomics’ MQ-9 Reaper was conceived and birthed as a super-sized version of the MQ-1 Predator, which had met with great success in the time-critical-targeting (TCT) role in the late 1990’s and early part of this century. Despite Predator’s utility in the TCT role, it was limited by the size, quantity and diversity of payload it could deliver, as well as by limited range and service ceiling. As a result, “Predator B” was developed to leverage the success of the “Predator A” design, while minimizing development time, risk, and cost. The final product was a weapons system capable of carrying 3,750 pounds (an increase of nearly 800%), including GBU-12 Paveways and GBU-38 JDAMs, in addition to AGM-114 Hellfires, and a 50% increase in range and altitude. Given the significant increase in capability over the legacy Predator design, the MQ-9 was redesignated “Reaper.”

Skunkmodels Workshop presents a beautiful rendition of the MQ-9, and the first injection-molded offering of the Reaper in 1/48 scale. The box contains 74 parts crisply molded in soft gray plastic, and one sprue of 3 parts molded in clear plastic. Recessed detail is crisp, although perhaps a tad heavy, and accurate when compared against reference photos. Decals for the US Air Force’s 432nd Air Expeditionary Wing and Department of Homeland Security/US Customs and Border Protection are included.

With only 77 parts and no cockpit, assembly was quick and relatively incident-free, although virtually none of the part ID numbers on the instructions jibed with what was on the sprues. Good thing it’s a pretty basic kit. It would have also been nice to have some detail inside of the engine intake and exhaust areas, instead of the kit design just leaving a big visible hole when peering into those areas. A couple dabs of putty needed to clean up a couple of fuselage seams, but was more likely due to my heavy-handed flash removal. Landing gear and wheel well detail is very basic, but may indeed be accurate given the simple nature of this class of UAVs. I just couldn’t find any good online reference photos for this one.

The only real unpleasant surprise was the lack of call-out in the instructions for nose weight. This burned me on their RQ-4B Global Hawk, and then again on this build. Shame on me. So, out came the tube of BB’s, the superglue, and the baking soda. I poured in the BB’s, glue, and baking soda (to accelerate the superglue curing) from the open main gear wells while the plane was in a nose-down attitude. Although I thought I had put in plenty, by the time weapons and prop were added in final assembly, my Reaper was teetering on its landing gear fulcrum once again.

The Hellfires and Paveways were nicely molded, built up well, and came with their own sheet of tiny decals. They really add an extra dimension to an otherwise monolithic airframe.

Color scheme is simple and uninspiring – Light Ghost Gray (FS 36575). Since there was no masking, I opted to bypass the primer and go right into Model Master Acryl Flat Black pre-shade, followed by Polly Scale Light Ghost Gray. Future was applied for the decal base.

The Cartograf decals are crisply printed in register and respond well to the Microscale System. The US “Stars and Bars” appear to be a bit out of proportion, but were used for the build anyway.

All said, though, Skunkmodels has another winner in their UAV portfolio, as the Reaper is a great companion piece to their Global Hawk. I can easily recommend this kit to modelers of all skill levels, especially those looking to add to their recce and present-day military aircraft collections. Looking forward to many more unique offerings from Skunkmodels!

Thanks to LuckyModel.com Ltd and IPMS/USA for the sample kit!