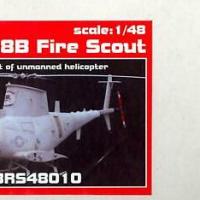 The Northrup Grumman MQ-8B Fire Scout is an unmanned helicopter used by the US armed services for reconnaissance, fire support, and precision targeting. It is based on the Schweizer 333 helicopter and currently 23 of the MQ-8B’s are being used by the US Navy. Brengun has produced a resin kit of this helicopter based on Attack Squadron’s earlier release. The kit is multimedia consisting of 45 gray resin parts which are finely cast with only one small pinhole I could find. There is also a PE fret of 16 parts.

The parts were well packed, but when I received the kit, three of the four struts to the skids had a clean break in them. More on the fix for that later. I separated the large parts from their casting blocks and the fit was very good - the main body, nose and top housing all fitting together with no issues. All the rear parts were added and the sensor array at the front and all the things underneath and again, no issues. The exhaust was added but in hindsight, I should have left it off for ease of painting., The only choice during this part of construction was a choice of rear left access doors. The next task is to add nice air scoops. Locations are a bit vague, but you can find a ton of pictures and videos online that make this simple.

I wanted to get the legs under it and so I tried several things. I tried duplicating the legs out of brass and could never quite get the right shapes. I ended up repairing the kit parts and using a template to get the right angles. I then used super glue to add a small backing strip of strip stock for support. I added it to the good leg also. When this was added to the bottom and the shock absorbers added as support, it looked pretty good. This made it stable enough to add the photoetch antennaes, tie downs and rear grill details which all fit well. I set this aside to concentrate on the main and tail rotors.

Starting with the main rotor, the four blades are cut free. I succeeded on three of four but broke one and ended up gluing it back together and sanding VERY carefully. The hub is very finely cast in three parts, and careful removal gives a great result. I drilled out the part of the blades to receive the pins from the hub and assembled and it looked great. The blades were added, and I moved onto the tail rotor which is a simple three piece photoetch build and no issues were encountered.

At this point, the kit is very fragile, so this is the time for slow and steady. There are four sets of markings but as far as paint, the kit is overall Ghost Gray FS36375. I used MRP paints and was totally impressed. I let that dry and added several coats of gloss in preparation for decals- and there are a lot. There are couple of neat logos that go on the front below the rotor. I chose the markings for BuNo 167792, HSM-35 Magicians from the LCS-3 USS Fort Worth. The decals were somewhat of an issue. If they folded over, they were unsalvageable, and I lost one of the stars/bars logos and substituted from the spares box. Once they grabbed, they didn’t move easily. They settled perfectly. Once dry, several oil washes were added. I then did the detail painting such as the rotor hub, shock absorbers, windows on the front and exhaust. I flat coated with Dullcote and let dry.

I added the main and tail rotors and another flat coat and done. This kit had some challenges due to some breakage and the tiny parts and multimedia and for that reason, I would recommend it to builders with some experience. In the end, you will be rewarded with a very cool, unique model.

My thanks to Brengun and IPMS/USA for the opportunity to review this great kit.