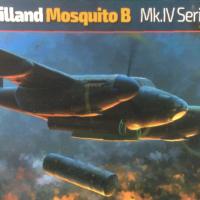 Thank you to Hong Kong Models for providing an innovative and exceptional kit representing a legendary Royal Air Force aircraft, the first kit in a “Mossie, The Wooden Wonder” series. Thank you also to the IPMS Reviewer Corps staff members who do the hard work behind the scenes, getting us kits to review and publishing our work.

This review is last of a two-part review. In this review you will find a brief build summary and conclusion, followed by detailed build log and reference list.

The most striking aspect of the kit is the stunning one-piece molding of the wing, horizontal tail fins, and both forward and aft fuselage components. I can summarize the importance of this molding approach by saying that I had very little seam filling to do, both because of the minimal number of seams present and the excellent fit in nearly all cases.

Construction produced no major surprises, with the kit building up into a very solid model. Hong Kong Models designed major part joins in places where the real aircraft was likely to have similar panel joins. Two areas with unusual construction approaches are the tail plane-tail-wheel unit, and the engine nacelle units. The tail planes are a single large piece, fitted with a single-piece elevator set. The tail wheel and well are assembled in the tail plane group. The complete assembly was gently rotated into the back of the one-piece aft fuselage with an initially scary amount of pressure, followed by a very gratifying click. The completed engine nacelles snapped into the wing in a similar fashion with an equally scary and gratifying result. Much of the interior detail is molded in, rather than separate pieces. The overall level of detail is quite good. Photo-etch harness were malleable enough to be pressed into position to good effect.

The large pieces produce a very solid model with a fast build. However, some planning for effective assembly needs to be done by the kit builder. I did not consider how important dry-fitting was for some of the larger part details, like fillers and fillet pieces. The fuselage components, the landing gear-engine nacelle assemblies and the wing went together with no trouble. The trailing edges of the wing and the tail planes, and the leading edges of the control surfaces have strips to be glued in to complete the parts. The trailing edges have concave fillets with a relatively long and narrow profile, and the leading edge fillets are similar but convex. I did not take the time I needed to fit the parts effectively and found myself fiddling around making corrections to issues I should have caught. One installed the parts are great!

The only other caution area from my blunders is to consider that many hinges and attachment points are somewhat delicate. The flap hinges should very carefully tested and fitted before positioning, as should the pivot points for the ailerons and the elevators. If I had taken more time earlier in assembly to run the parts through thorough dry-fitting, I may have saved myself some trouble later.

None of the previous comments should be considered negatives to a very nice kit. The different design approach requires different planning and testing. I discovered this new approach concept sometimes after it was too late!

I recommend this kit highly! I enjoyed the new molding technologies and found them to be very good, requiring a slightly different planning approach. I stated in the pre-build review that I found it difficult to not work through the night building. That “problem” was indeed an issue. I am lucky to have built earlier HK kits and the Mosquito was a build at a different level. I completed version B, DZ637/P3-C, No. 692 Sqn, from Graveley during the spring of 1944, with the mammoth cookie bomb. I weathered the aircraft out to a worn night bomber. I am very pleased.

Thank you again to Hong Kong Models for providing IPMS with this review kit and for offering another excellent subject. I value your support of the scale modeling community. Thank you again to the Reviewer Corps, who allow me opportunities to build exciting kits like this one!

Pre-build work and general observations from the build

Not Related to the Kit

I top-coated with Vallejo gloss varnish, decaled, and followed with a coat of Vallejo flat varnish. All other colors were Testor MM acrylics or Tamiya acrylics. I found that positioning time for wet decals was a bit shorter than I expected, but not too bad. I had some silvering issues, particularly with the warning stripes above the wing coolers, but I consider that problem to be builder error. Likewise with the flat coat, I found a serious dandruff-like effect on the final coat. I have never had any issues with Vallejo product before, so I will also put that on as builder error as well. Weathering seemed to clean the mess up, ironically enough.