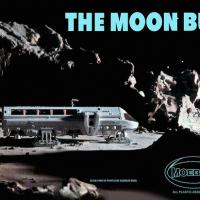 From the Editor: The following is submitted by fellow IPMS Member Clyde Jones regarding addition of mentioned lighting set to model:

"LEDs ARE polarized, just like batteries. Connect them ”backward” and they not only don’t light, they slowly go dead. Or not so slowly. The light strip is not polarized." (Added May 2011)

I built my first Moon Bus in 1969 and that model still resides in my display case. Because of my fascination and interest with models rooted in “2001: A Space Odyssey”, it was with great anticipation that I awaited the arrival of the recently released Moebius Moon Bus and I purchased a copy from the local hobby shop as soon as it arrived. When Moebius offered a kit to IPMS for review purposes I was pleased when it found its way onto my workbench and I have thoroughly enjoyed the experience of building a 2nd Moon Bus some 41 years after having completed the first one.

The Moon Bus has often been considered a “Benchmark” kit by those who model Sci-Fi vehicles. Hard to find, and even more difficult to afford, the original Aurora kit is the crown jewel in many a collection. The new Moon Bus by Moebius has made it possible for fans to own a Moon Bus model at a reasonable price and to add the Moon Bus to their collection of classic Sci-Fi vehicles. The Moon Bus by Moebius has been well received by the Sci-Fi modeling community and copies are flying off the shelves. And for good reason! This kit is a ton of fun and well worth the MSRP.

The box features the same art work that graced the original Aurora kit. Of course, the company logo has changed and the lettering on the Moebius box deleted the reference to the movie in which the Moon Bus appeared but the picture is unchanged. Opening the box and inspecting the parts was a unique experience in and of itself. After so many years since the construction of my first Moon Bus I found that the memories of building the model and watching the movie (I hesitate to report the number of times I’ve watched the movie!) were overpowering and very pleasant.

Molded in white plastic, the parts are clean and crisp. Only a few very small areas of flash are present, most notably on the arm rests of the seats. These areas require only the touch of a little sandpaper to clean the part thoroughly. There are some mold release marks on various parts that should be removed prior to assembly but these areas are not in prominent locations.

The parts fit without any significant issues, with the exception of the various parts of the three landing skids. Each main landing skid has three “walkers” that consist of two parts. It will be necessary to work on those seams since they will be visible on the completed model. The main spring strut for each of the three landing skids consists of two parts and when assembled, the seam must be cleaned up as well. Clean up is a little more difficult on these parts due to “accordion-like” nature of the oleo. A round file will do the trick.

For all intents and purposes construction of the Moon Bus is easy, straight forward and well within the ability of even the most inexperienced modeler.

This kit is highly recommended and Thanks to Moebius for providing this kit.

For those who wish to add some detail to the Moon Bus, there are detail sets and decals available.

Non-kit items for the Moon Bus:

Port side view
Previous Next